Welcome back, Erica Hallman. And just in the nick of time.

"It was pretty easy to get back in the groove," said Hallman, a 5-foot-8 senior who missed the Jayhawks' first two games while rebuilding her academic house.

Coach Bonnie Henrickson held Hallman out of practice for a week to allow Hallman to catch up on scholastic lapses.

"She had a shopping list of things she was responsible for," Henrickson said. "She turned in her assignments, and came back to practice on Thanksgiving. It was good to have Erica back."

Hallman, who has started virtually every game over the last two seasons, came off the bench Sunday and logged 31 minutes. 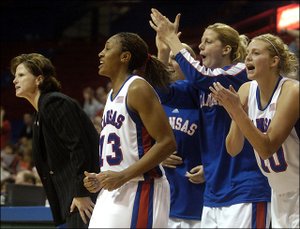 "It was strange," she said of her relief role, "but I'll take it anyway I can get it now."

Hallman, who had earned academic All-Big 12 Conference honors in the past, was vague about her classroom woes, saying only that she had learned a lesson.

"I've got to take care of business in the classroom as well as the floor," she said.

"I wouldn't call it that," she said, smiling. "I just made bad some bad decisions. I just wasn't doing what I was supposed to do."

Hallman made very few bad decisions on the floor Sunday. She was 4-of-9 from three-point range on a day when the Jayhawks desperately needed outside shooting to compensate for the foul woes of forwards Crystal Kemp and Taylor McIntosh.

McIntosh and Kemp shared the team high in rebounds with eight apiece despite logging only 23 and 18 minutes respectively. Kemp also posted 15 points, or nearly a point-a-minute pace.

"Heaven knows what happens if she plays 30 minutes," Henrickson said of the 6-2 Kemp. "They had a hard time guarding her, but they guarded her well when she was sitting next to me."

Northeastern, a mid-major affiliated with the Colonial Athletic Assn., was outscored 36-16 in the paint, but stayed close by converting 24 of 29 free throws.

Shaleyse Smallwood, a 5-5 guard, accounted for half the charities by going 12-for-12 at the foul stripe and finished with a game-high 22 points. Maralene Zwarich, a 6-foot senior guard from Shawnee Mission North, wound up with 19, but missed 14 of 21 shots.

"They were good," KU freshman point guard Ivana Catic said of the Huskies. "They found a way to play with us."

Catic was good, too. She scored 16 points and was credited with six assists while playing all but two minutes. In KU's three season-opening victories, Catic has 22 assists and only five turnovers.

Catic contributed a crowd-pleaser in the second half. On an in-bounds play under the basket, she bounced the ball off a Northeastern player, stepped onto the floor, caught the carom and flipped the ball into the basket.

"She plays with that kind of poise," Henrickson said. "Right now, the kids look to her for leadership. She's a little bit of the heart of this group."

Hallman, however, was the story of this game.

"She stayed aggressive," Henrickson said. "Conditioning looks like an issue right now, and that is part of the problem she got herself into."

Kansas will play twice this weekend in the New Orleans Invitational that was transplanted to Allen Fieldhouse because of Hurricane Katrina. KU will meet Birmingham Southern at 6 p.m. Friday and New Orleans U. at 1 p.m. Saturday.