Mention of the name Dexton Fields never again will elicit the response "who?" if a Kansas University football backer is in the room.

Fields, a red-shirt freshman from Dallas, made the first reception of his career the biggest one of the Kansas University football season Saturday in 24-21 overtime victory over Iowa State at Memorial Stadium.

"Before the game, I had a vision that I was going to make a big touchdown," Fields said. "When I caught it, it was just fate, I guess."

Fields said he was recruited by Utah, Oklahoma State, Baylor and Iowa State before making an oral commitment to Kansas.

"I liked the closeness of the team," Fields said. "I didn't want to be somewhere I felt alone.

"I didn't want to feel isolated away from home. I wanted to be with people I could trust and people I enjoy being around." 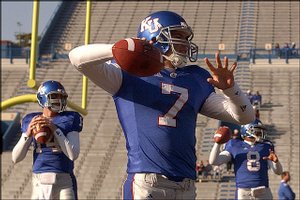 During his senior year at South Oak Cliff High, Fields once caught five touchdown passes in a game.

Neither that nor his big catch Saturday make Fields the most talked-about athlete from his high school among Kansas University sports fans. Darrell Arthur, one of the most highly rated basketball players in the country, is a senior at South Oak Cliff and is the No. 1 spring recruiting target for Jayhawks coach Bill Self.

Asked for his opinion on whether Arthur could sign with KU in the spring, Fields said: "He said he liked it here. He really liked Roy Williams. That's what first made him interested in Kansas, and he's still interested in Kansas. Kansas and Indiana are his top two."

Fields said he would like to see his cousin attend KU.

"If he comes here, I can get him in church and keep my eye on him," said Fields, who is extremely vocal about his faith. "If he chooses to go to Indiana, I'll still be there for him."

Fields was there for Brian Luke on Saturday, and that's one big reason the Jayhawks are bowl-eligible for the second time in three years.