The future is now

Russell Robinson, who had his own case of stage fright a year ago, can't wait to see how Kansas University's four freshmen respond under the bright lights of Allen Fieldhouse tonight.

"We've already projected that Mario's first shot is going to be an airball. I think it's going to be that because of the crowd," Robinson, KU's sophomore guard from New York, joked of rookie point guard Mario Chalmers.

"For me, my first game was kind of a surprise. I didn't know what to expect," Robinson added in a serious tone, expressing that, deep down, he thought Chalmers would do fine.

Chalmers has taken teammates' ribbing in stride all week. 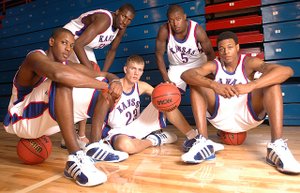 "C.J. (Giles) tried to tell me that. I said I'd not be that nervous to shoot an airball," Chalmers said.

"I'll be ready. We're out to show that our freshman class isn't that inexperienced. We're going to come out and try to keep up the KU winning tradition."

Heck, he had them Monday.

"I'm already nervous," Downs said before Monday's workout. "In high school I'd get nervous before big games. I don't know what I'm going to do - my first college game, 16,300 in here jumping, screaming, crazy - so we'll see. I'm going to have to learn as I go."

It remains to be seen how many, if any, freshmen start tonight. Coach Bill Self has said he'll start the players "who have worked the hardest and played the most consistently the best" during preseason camp, noting it'd be difficult to keep preseason standouts Giles and Robinson - a pair of sophomores - off the court.

"Some have had a hard time at practice sometimes," Robinson said of the freshmen. "They are all gamers. When the game is on the line, they will go out and perform."

KU figures to need all four to produce this season.

"There's a lot of pressure on us," Downs said. "Coach is relying on us to do great things. It's what he recruited all four of us to do - play ball is what all four can do."

The freshmen have all sparkled at times the last three weeks of practice and also during summer pickup games.

"Our freshmen are always willing to get better," fifth-year senior Jeff Hawkins said. "They listen at practice. They know what they did wrong and want to get better. With time they will be great and understand things better."

As far as how the rookies play against NCAA Div. II Fort Hays State ... stay tuned to find out.

"Once they get out there, the adrenaline will be going and they will be fine," Robinson said.

Hawkins sure hopes so.

"They probably are nervous," he said. "Late Night was a little taste of it. To actually play games is a lot different. Hopefully they'll get through the first exhibition game, get the jitters out and get the season going."

Self is thinking not only the freshmen, but KU's sophomores can gain a lot tonight.

"I think getting guys some meaningful minutes in front of a crowd where they can generate a little confidence and play a way whether good things happen or don't, you play the same way, is important," Self said.

As to what he wants to get out of tonight's clash, the coach said: "Hopefully win, stay healthy, get a lot of guys meaningful minutes."

And not see too many airballs.