Rather than telling each season-ticket holder where they'll be sitting, Kansas University athletic officials are switching to a system designed to let fans pick their seats.

"We're starting with football," said KU Associate Athletic Director Jim Marchiony. "If it works as well as we think it will, we'll do it in basketball, too, men's and women's."

Last week, football season-ticket holders were assigned times to call the ticket office or come to Memorial Stadium to choose their seats. Those with the most points get first choice.

It's likely, Marchiony said, that some fans -- many, perhaps -- will end up with better seats at Memorial Stadium than they're anticipating.

The seat-picking process begins today and continues Wednesday. It resumes May 17-19.

The change does not affect the priority point system installed last year to boost contributions by linking seat locations to amounts donated. 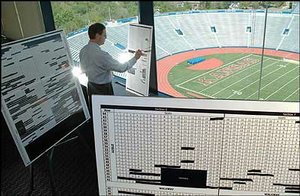 Kansas University is switching to a ticket allocation system that will give football fans more of a say in where they will sit at Memorial Stadium. The new system, named Select-A-Seat, will be tracked on boards like that in the foreground with seats marked off as reserved by fans. At left is associate athletic director Jim Marchiony, who says the system could be used for other sports, including men's and women's basketball.

Points are based on donations to the athletic department or the department's athletic scholarship funds, membership in the KU Alumni Association and past years of season-ticket purchases for football, basketball and other KU sports. Those with the most points get the best seats.

The point system proved controversial as hundreds of longtime basketball fans and season-ticket holders who had donated minimal amounts lost their prime seats at Allen Fieldhouse to those willing and able to contribute considerably more.

"A year ago, when we unveiled the double-your-points offer, that raised $7 million in about eight weeks," Marchiony said. "The contribution drive that ended in July 2004 generated about $12 million more than the 2003 drive."

This year's drive, which ends in July, does not include a double-point offer. It's expected to raise between $7 million and $8 million, Marchiony said.

Before the point system, he said, most drives generated about $5 million.


Marchiony said he had heard concerns that applying the point system to football would dampen ticket sales.

"There are some people who are nervous because it's new," he said. "But we've really tried to alleviate all of the unknowns and most of the fears, especially those of the longtime fans."

In addition to letting ticket holders pick their seats, Marchiony said the athletics department had:

"The atmosphere at a football game is so much more family-oriented than it is at a basketball game," Porter said.

"A lot of people are talking about it. They want to sit with the people they've been sitting with."

Marchiony said the change did not affect seat assignments for KU faculty, staff and students, which are handled separately.