Tualatin, Ore. — The changes already were evident as Kevin Pritchard took charge of his first practice Thursday as interim coach of the Portland Trail Blazers, one day after Maurice Cheeks was fired.

There now was a formal practice schedule posted on the wall at the team's suburban practice facility, and Pritchard, a former Kansas University standout point guard, noticeably was vocal during drills as the Blazers took the first steps of the post-Cheeks era.

The likable Cheeks was fired a little more than 24 hours earlier as Portland struggled to a 22-33 record, the team's worst mark this many games into the season since 1975-76.

The 37-year-old Pritchard was hired as the team's director of player personnel in August, after 11/2 years as a scout with the San Antonio Spurs.

He played at KU from 1986 to 1990 and helped lead the Jayhawks to the 1988 NCAA Championship. Pritchard scored 1,692 points in four seasons at KU, ninth on the Jayhawks' all-time list.

The change in coaches signaled a "youth movement" for the Blazers, with the emphasis shifting from winning games to evaluating young talent. The Blazers started the day in 12th place in the Western Conference with bleak chances of capturing one of the eight playoff spots.

Pritchard reinforced the movement when he spoke about what the team's style would be in the final 27 games of the season, singling out 19-year-old rookie point guard Sebastian Telfair.

Telfair, the 13th overall pick in the draft out of Lincoln High in Brooklyn, N.Y., averaged 10.4 minutes a game under Cheeks.

"We've changed some things. We're going to try to really run up and down. Let Sebastian create, see what we can get out of that, put in a little bit of a secondary break and let everything flow from there," Pritchard said. 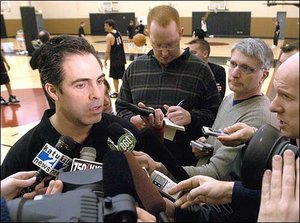 While the players said they thought practice went well, there still was sadness. Most of the veterans did not linger on the practice courts like some did under Cheeks. Instead, there was a quick retreat to the locker room.

Damon Stoudamire, who was one of the closest players to Cheeks, said he would do what the team asked him to do -- but suggested he might not be happy about it.

Pritchard said he understood the frustration among the veterans.

"If there was pixie dust that we could sprinkle over and make everybody happy, we certainly would. But there isn't," he said. "I told them I expect them to be professional.

"Some of them know that they have to make sacrifices. And that doesn't come easy. I'm sensitive to that, trust me."


Pritchard has coached before. He served as coach, general manager and director of player personnel for the Kansas City Knights of the American Basketball Association.

He played four seasons in the NBA with Golden State, Boston, Philadelphia, Miami and Washington, and also played in Europe and in the CBA. 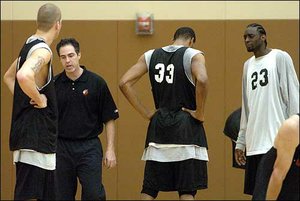 Pritchard only will serve out the season, and then the team will begin the search for a new coach in earnest. He said he didn't want the job permanently.

"Moving forward, we need to really evaluate what we have, and what better way to do that than for the player personnel director to get under the hood and take a look," Pritchard said. "Our future's bright, we're going to see what we really are, we have some young talented guys who are fun to watch.

"We don't know exactly where they are developmentally, but we hope to figure that out in the next seven to eight weeks, and help us build, that is what this is all about."