"I was sitting here on my day off all by myself in the house crying -- reflecting on the years I spent with Micah, realizing he's going to be gone," said Downs, the 42-year-old father of incoming Kansas University basketball freshman/McDonald's All-American Micah Downs.

Today, Steve Downs, in the Seattle suburb of Kirkland, Wash., is spending his first Father's Day without Micah, the eldest of his four children with wife, Gerri.

Since Friday night, Micah Downs has been in Lawrence. He is eager to start summer school and get a head start on his college hoops career.

"My wife has been crying about him leaving for months. It just hit me all of a sudden," Steve Downs said. "It's been nothing but pure enjoyment coaching my son, being with my son."

Like so many dads celebrating today's holiday, Steve Downs has been a parent, role model and coach to Micah.

He's tutored Micah in not only basketball, but baseball, football and track, putting thousands of miles on the family vehicles.

"My goodness, I can't even count that high," Steve said of the number of games he's watched Micah participate in. "I know it has been the biggest part of my life -- and my wife's as well."

Micah Downs started young in organized sports -- he played T-ball in kindergarten -- but eventually he settled on basketball as a specialty. 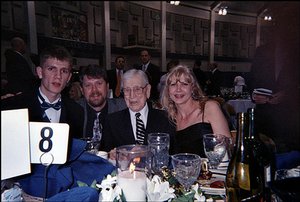 The family of incoming Kansas University freshman Mmicah Downs has been reflecting upon Micah's childhood. Downs, who Friday moved to Lawrence, is shown above at left with, from left, father Steve, legendary UCLA coach John Wooden, and mother Gerri at the McDonald's All-American game in April in South Bend, Ind.

"Every time was fun. Every game was fun. There were times I was physically tired and my body hurt from working construction, but I went anyway. I didn't want to miss something cool that might happen," said Steve Downs, who recently gave up construction work for the less-draining job of automobile salesman.

Micah -- who has lived in Missouri, Montana, Nevada and Washington with mom, dad, brother Stevie (eighth grade) and sisters Elizabeth (seventh grade) and Rachel (second grade) -- always has been grateful for his dad's financial and emotional support.

"We've always been tight," Micah Downs said. "When he first started coaching me, it was in baseball. He'd get baseball videos for me to watch. He wanted to make sure I learned how to do things the right way."

A quick learner, Micah developed a 68-mph fastball as a fifth grader.

"I read books written in the '40s. I tried to get advice from other coaches," said Steve, who tried never to push his son too hard. 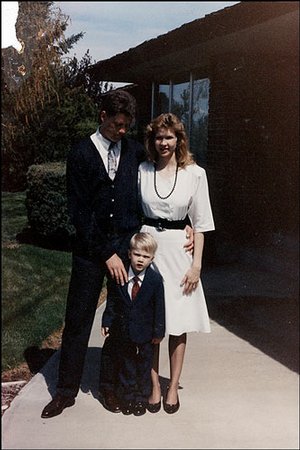 "I did periodically ask, 'Is this what you really want to do? You don't have to,''' Steve said of participation in sports. "Some kids are playing just because their parents want them to. We wanted to make sure he was doing it because he wanted to."

Micah said he was grateful dad and mom let him develop at his own rate and let his interest in basketball naturally surpass that of track, football and baseball.

"When I played baseball, I was into that. I got burned out and decided I didn't want to play anymore," Micah Downs said. "They said they'd like to see me play, but if anything they accepted my decision. I gave it up after seventh grade.

"It was good of him to coach me and support me, to help me become a good ballplayer." 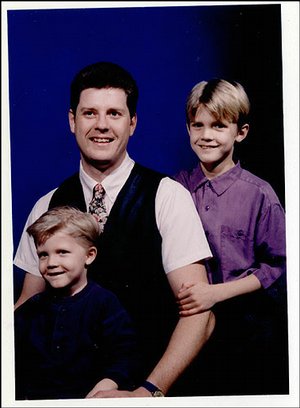 A young Micah with Steve and younger brother Stevie.

"I hope if and when Micah has a family and if he has a boy to coach he'll learn from it and be a better parent," Steve said.

"My wife and I live for our kids. Everything we do we try to make their lives better than ours. You have children ... it's your responsibility. God loans them to you for 18 or how many years.

"I'll miss him. I will not see him Father's Day, but I'm happy where he's going. I feel secure with that. He's in good hands with (KU coaches) Bill (Self), Joe (Dooley), Kurtis (Townsend), Tim (Jankovich) and Danny (Manning). I really believe that."

Micah is equally enthused about the new chapter in his life. 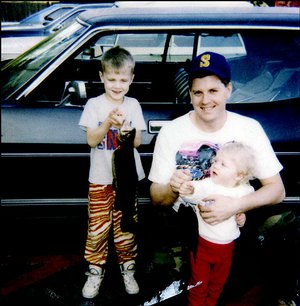 "I've been home a long time. It's gone by fast," he said of his time with family. "I enjoyed it all. I have cherished moments.

"I'll be OK. I'm ready to go and start my own thing. I am kind of nervous about it," he said. "It's like going from junior high to high school. It's not a small step, it's big going from high school to college. I just have to take care of business and not be intimidated."

Chances are, thanks to lessons taught by dad and mom, Downs will be fine.

"I don't want to sound like I'm bragging," Steve said. "Micah is a special kid. He was born with athleticism. When he was really young, he threw a football over his grandmother's house, one of those little footballs. Sometimes parents go overboard and think their child is something they are not. Luckily, I was right about my son."