In Charlotte, N.C., to attend the wedding shower of his son and future daughter-in-law, Roy Williams wasn't in much of a partying mood Saturday afternoon.

The University of North Carolina men's basketball coach, in fact, had no bounce in his step a day after Kansas University's athletic department released a report indicating Williams violated an NCAA extra benefit rule during his 15 years at KU.

"It was by far the toughest day I've ever had in my professional career, I'll tell you that," Williams told the Journal-World in an exclusive interview.

"Yesterday and today were far more difficult than Halloween night, 1988."

Halloween '88 is when the NCAA announced sanctions against KU's program for violations committed by former coach Larry Brown. Those sanctions kept Williams' first KU team from playing in the 1989 NCAA Tournament.

"Seeing the headlines about rips your guts out," Williams said.

He violated an extra benefit rule by approving donor gifts of between $50 and $400 to graduating basketball players and others who completed their eligibility.

"It was almost the sensational thing to put out there -- KU and Roy Williams," Williams said of media reports following Friday's 2 p.m. news conference at KU's Hadl Auditorium.

"Last night when I watch the ticker tape on the bottom line of ESPN and it says, 'Kansas reports coach Roy Williams approved payments to players' ... It's not really a good description of what happened, but it's what everybody will see. 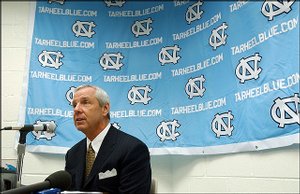 North Carolina men's basketball coach Roy Williams answers questions for reporters during the team's media day Oct. 16, 2003, at the Dean Smith Center in Chapel Hill, N.C. Williams said a communications breakdown lead to improper gifts being give to players while he was head basketball coach at Kansas University.

Williams issued a statement Saturday admitting he made "a mistake" in telling one donor he could mail small graduation gifts to players departing the program.

"I did speak with one alumnus and one alumnus only on the question of, 'May I give these seniors a graduation gift?'" he said, referring to booster Dana Anderson.

"I personally felt this was not a problem and evidently a communication problem led me to believe this was OK with our compliance department. Therefore, I told the alum a small 'gift' would be OK. I also stated the 'gift' shouldn't be extravagant and there should be no campaign for this -- just a personal graduation 'gift.'

Williams said he never approved gifts provided by booster Bernie Morgan, and instead directed him to the compliance department for clarification of rules.

"The alumnus himself says in the report (from KU to NCAA) that I referred him to the compliance department and that is where he felt he received 'approval,'" Williams said. "The 'gifts' in three instances were purchasing lifetime memberships to the university's alumni association and, in one case, the purchase of a suit of clothes for an individual. I never had any knowledge of these 'gifts' and therefore did not give my 'approval.'''

Williams said he also did not give approval to Joan Edwards to provide small cash gifts to players in graduation cards.

"The self-report says that scenario of a 'graduation gift from an alum was a small gift of $25 to $100' and actually began before I was the head coach at Kansas. I never had any knowledge of these 'gifts' and therefore never gave 'approval,''' Williams said.

Williams told the Journal-World "the bottom line is I had no idea that it was a violation. I am deeply disappointed I allowed it to happen. Something at Kansas happened under my leadership, and I am deeply saddened to say there was a mistake."

It is a mistake magnified by Friday's news conference at KU, which reported violations in football and women's basketball that garnered self-imposed sanctions.

"Yes," Williams told the J-W, when asked if he thought his violations were secondary. He did not offer a comment when asked whether he thought the news conference was necessary.

He simply wanted it stated that he tried to run a clean program at KU.

"I love the University of Kansas and hate that this situation developed. I feel strongly that this does not paint a proper picture of my 15 years there. I am personally very hurt by what has happened," Williams said. "My integrity and reputation are extremely important to me, and the initial media reports of these incidents have in some instances been extremely harsh.

"Kansas never gained a recruiting or competitive advantage -- the students had completed their eligibility and it was seen as a 'graduation gift.' I have never promised anything to a prospective student-athlete, including playing time," he stressed.

Williams says he tried to keep abreast of all rules.

"I take compliance with NCAA rules very seriously. If ever I do not, or the university leadership thinks I do not, it is time for me to move on," he said.

"I have absolute confidence in Roy Williams. We are proud to have him as our coach," Moeser said. "Our program is in good hands. Roy and his staff pay close attention to NCAA rules, and he competes with the highest of integrity," Moeser said.

"I am confident he received approval from the compliance staff at Kansas (in approving graduation gifts)," Baddour said. "I have never worked with a coach who is more serious about adhering to the rules than coach Williams. He has proven that for more than 25 years."

Frederick, who hired Williams at KU, added his support.

"In all my years of intercollegiate athletics, there has never been anyone I worked with who was more scrupulous about working within the rules, asking questions about the rules and being committed to the rules than coach Williams," Frederick said. "He ran a model program at Kansas in every respect. If there was a mistake in this matter, it was a communications mistake, because Roy Williams would never knowingly violate a rule. And everyone who worked around him at that time knows that to be the case.

"If this matter had been reported (to the NCAA) as a single issue, I am confident it would be dealt with as a secondary rules violation," Frederick concluded.