Sometimes, timeouts are better left buried in the back pocket.

Certainly, the Western Illinois men's basketball team would like to have its first one saved for later. Because what came of it was a run by Kansas University that propelled the Jayhawks to an 86-57 victory Saturday at Allen Fieldhouse.

WIU's David Jackson nailed a three-pointer to tie the game at 6 early in the first half. Leatherneck coach Derek Thomas then called the timeout, saying later he wanted to assure his squad it had a chance to keep it tight and at the same time prepare his players for what Kansas was about to do as an answer.

KU came out from the stoppage and went on an 11-0 run thanks in part to two WIU turnovers. The score became 17-6, and the Leathernecks never were within three possessions again.

Like nearly every mid-major that journeys to Allen Fieldhouse, KU's game-changing run was bound to happen at some point, considering the Jayhawks' superior athleticism and size. But to do it that early certainly was deflating on a night that was otherwise sweet for Thomas, a Kansas City, Mo., native with strong feelings for Allen Fieldhouse. 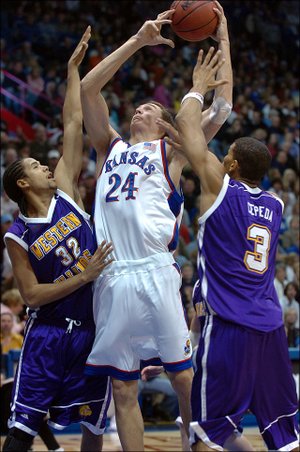 "Like I said, it's an honor to be able to coach here," Thomas said. "I wish we would have done a little better and that Kansas would have been a little more hospitable. But they have things that they need to get done, too, and I understand that."

The Leathernecks (2-3) really had few bright spots Saturday. They shot 29 percent from the field, committed 22 turnovers compared to 12 assists and never had a sniff of the lead, not even early.

"We can't drop our heads when we play teams like Kansas," Jackson said. "We have to keep our heads up and keep on pushing. We have to take it game by game."

Jackson scored 17 points to lead WIU, one game after hanging 32 in a victory over Eastern Illinois. Marlon Mahorn's 11 made him the only other Leatherneck in double figures.

Kansas, meanwhile, had five with at least 10 points.

Saturday's game was the first of a three-game road trip for the Leathernecks. They'll play Tuesday at Loyola before traveling Saturday to Evansville.