With season football tickets selling for $225 each and men's basketball tickets going for $760 each, a business' bill for the total package would run $3,770.

"We're doing everything we can to increase football season ticket sales," said KU Associate Athletic Director Jim Marchiony. "This is part of that effort. We think it's an attractive offer."

The basketball tickets are available, he said, because "about 100 to 200" of the 1,800 tickets set aside for faculty, staff and retirees have not been sold and are likely to be returned.

KU faculty, staff and retirees who did not have basketball tickets prior to last year and who did not win tickets in last year's lottery have until Sept. 9 to buy half-season tickets, said Susan Twombly, chairwoman of the faculty senate's three-member committee that oversees ticket-sale and -seating policies. 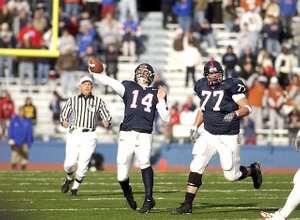 Kansas University quarterback Brian Luke's desperation pass fell incomplete to end last season's loss to Texas at Memorial Stadium. The Nov. 13 game drew 38,714 fans, and KU officials are hoping to drum up more support for this year's team. It is marketing a package deal to businesses that include basketball tickets.

KU faculty, staff and retirees are entitled to a 20 percent discount on their ticket purchases.

Such buyers of basketball tickets are not subject to the athletic department's priority point system, but their seating is limited to 600-seat sections in the northeast, southeast and southwest lower corners of Allen Fieldhouse.

Basketball tickets obtained through the athletic department's "10-for-2" offer will be subject to the department's priority point system, Marchiony said.

"If businesses are concerned about (basketball) seat location, it would certainly behoove them to be Williams Fund members," Marchiony said, referring to the department's scholarship fund.

Donors earn one point for every $100 contributed to the Williams Fund.

Next month, basketball ticket holders will be allowed to pick their seats for the 2005-06 season. Those with the most points are expected to pick the best seats.

Contributions for determining point totals for the 2005-06 season were due Aug. 1.

Factors contributing to the likelihood of faculty, staff and retiree tickets being leftover, Twombly said, include:

¢ Complaints that many of the seats were in sections behind students, who, in keeping with tradition, stand throughout the game, blocking the view of those behind them.

¢ Complaints that some senior faculty members' seats weren't as good as their not-so-senior colleagues'.

¢ Confusion about the lottery system affecting those who didn't have tickets prior to the 2004-05 season.

¢ Though long-assumed, pent-up demand for tickets proved to be exaggerated.

"All along, we assumed that people new to the university were unable to get tickets. In fact, that turned out not to be the case," Twombly said.

She predicted a major overhaul of the seat-assigning system for faculty, staff and retirees in time for the 2006-07 season.

"The system we have now is just way too complicated - so complicated, it's way too difficult to administer," she said. "It was designed to satisfy a pent-up demand that's apparently turned out not to be there."