More than one player Thursday said KU's new uniforms looked like those of the NFL's New York Giants.

The blue is much lighter than the navy worn the past three years, but the biggest difference is the pants, which are now light gray and have a thick blue stripe down the side with red trim.

KU has three tops - blue for home, white for the road and an alternate crimson jersey for special occasions.

Prior to media day, KU opened practice to the public Thursday morning. It was a 21â2-hour workout that appeared to go smoothly.

The most noticeable change since practice began was another shuffling of the offensive line. Todd Haselhorst, moved from defensive tackle to center in the spring, was practicing with second-team offensive guards Thursday.

David Ochoa was first-team center, with Ryan Cantrell as the backup. Bob Whitaker had his usual place at left guard, while Jake Cox took first-team reps at right guard.

Tackles Matt Thompson and Cesar Rodriguez were at their same spots. 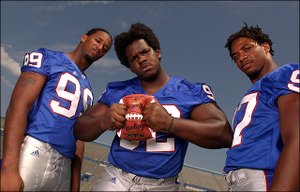 "Right now, we still have Cesar at left, Matt Thompson at right. We don't have any thoughts about moving them," KU coach Mark Mangino said. "We're going to have some rotation at guard, which will be helpful. We're going to have Bob Whitaker, we're going to have Travis Dambach. Jake Cox is practicing real well. Haselhorst is trying to get in the mix there, and he has to continue getting good repetitions and staying focused."

Mangino said sophomore Derek Fine was atop the depth chart at tight end, with freshmen Russell Brorsen and Josh Bell behind him.

Bell was recruited as a tight end out of Texas, while Brorsen, an Oklahoman, was brought in as a defensive end and moved to offense at the beginning of workouts.

"Josh Bell is in there competing for that position as well," Mangino said. "Russell is just ahead of him, more than anything because he's been able to pick up the offense very quickly."

OK, so linebacker Kevin Kane isn't going to beat a turtle in a race. It's not because he's not trying.

True, Kane's no elite sprinter, but the senior has negated any lack of speed by registering 69 tackles and earning honorable mention All-Big 12 Conference honors last year.

Mangino said Kane's ability to read offenses, react quickly and anticipate faster than most made up for any cement in his shoes.

"There is something to be said for intellectuals playing football," Mangino said. "You can't fool Kevin Kane."