St. Louis — Kansas University's four juniors now know what it's like NOT to reach the Final Four.

"It doesn't feel good ... I can tell you that," junior Michael Lee said after the fourth-seeded Jayhawks' 79-71 overtime loss to third-seeded Georgia Tech in a classic Elite Eight contest Sunday at the Edward Jones Dome.

"But I will not hold my head down after this. We battled back all season. We scratched and clawed and went a lot farther than some of the naysayers said. A situation like this, you've got to take the bitter with the sweet. Life goes on. You've got to keep moving."

No tears were dripping on Jayhawks' faces in the locker room Sunday after juniors Lee, Wayne Simien, Aaron Miles and Keith Langford were denied a third straight Final Four berth.

Double- and triple-teamed all game, he grabbed 11 rebounds while playing a whopping 43 minutes despite his strained groin.

"I'm just proud of the guys in this locker room, the coaching staff. The ups and downs we faced this year ... a lot of people counted us out in conference play. We were even doubting ourselves," Simien said. "We fought and clawed our way back to get to this point. For us with extra time to give this another shot, we'll definitely try to use that time to our advantage and come back strong next year."

The Jayhawks, who missed 16 of their first 18 field-goal attempts but rallied to finish with 40-percent marksmanship, were victimized by a 29-point outburst from guard Jarrett Jack.

After trailing by as many as 11 points in the first half, the Jayhawks (24-9) forced overtime after getting a defensive stop on Tech's final possession, right after J.R. Giddens swished a deep game-tying three with 16.4 seconds left. 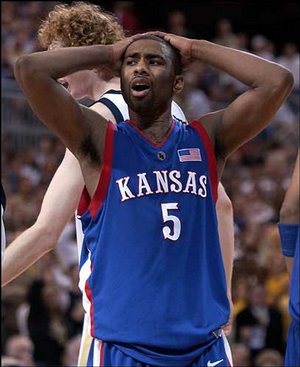 Kansas guard Keith Langford reacts after fouling out against Georgia Tech in the 2004 NCAA Tournament. The Jayhawks lost the Elite Eight game, 79-71 in overtime. Langford hit the winning shot eight months later in the Jayhawks' 70-68 overtime victory against the Yellow Jackets.

But Langford fouled out on a questionable call shortly after he opened the extra session with two free throws, and Tech outscored the Jayhawks, 13-5, in the five-minute OT to advance to its first Final Four since 1990.

"It hurts a whole lot," junior point guard Aaron Miles said of his first Elite Eight loss. "J.R. hit a big shot, but their players stepped up in overtime, especially Jack. He did some great things."

Jack had eight points in the OT, including two free throws with :46.8 left to give the Yellow Jackets a 76-71 lead. His free throws followed the game's biggest bucket, a three-pointer by Will Bynum that answered a Michael Lee three and broke a 71-all tie with 1:51 left in OT.

Jack's free throws followed a three-point miss by Lee and foul by Lee -- his fifth -- with under a minute left.

"I wasn't surprised Bynum hit that three," Lee said. "He's a great player. He had a good look and knocked it down."


Lee -- who had 11 points, including two big threes in three tries -- thought he had answered Bynum's three at 1:21, but the shot clanged off the rim.

"It felt good. I had good lift on it. I shot it a little too hard," Lee said.

Georgia Tech hit two of three shots and eight of 10 free throws in OT, while KU made just one of six and three of four free throws.

"We might have run out of gas a bit," Simien said, acknowledging it was tough playing without Langford for most of the extra session. "We didn't have enough to get it done."

KU trailed, 36-31, at halftime, despite the fact Simien and Langford managed just two points apiece. They combined to miss 10 field goals without a make.

Georgia Tech made life miserable for the 6-foot-9 Simien, who was 0-for-6 from the field the first 20 minutes with nine boards.

He even missed a dunk try.

"It was tough to get it to him. They sagged off me and fell in his lap," Miles added.

Simien admits it was rough going inside.

"They did a good job of doubling-down inside," Simien said. "The shots I did get felt good. A lot were in and out. The basket looked small for me tonight."

KU coach Bill Self lauded Tech's plan that started with 7-foot-1 Luke Schenscher, who finished with 15 points and four rebounds.

"They played us smart," Self said. "They had the big fella in there playing behind, and everybody else dove hard. I mean, dove hard. When our big guys did catch it, they felt guarded. But when that happens you have to step up and make some outside shots."

"The second half," Self said, "we tried to do a lot more spreading it and driving it. Wayne got a lot of looks he normally makes, and we missed some shots we've been making in the last month." 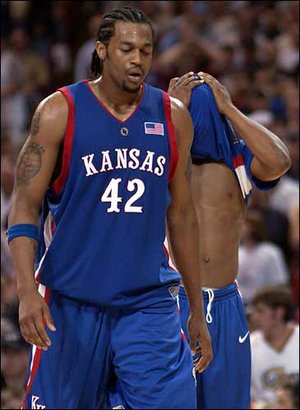 Kansas University's Michael Lee, right, hides his head after fouling out of the game as teammate Jeff Graves heads to the bench.

"I got a little tired close to overtime," Simien said, "but it is a big-time game. You want your best players in as long as you can have them in. I just wanted to stay out there, and I felt I had enough in me to continue to stay out there and fight. Coach had confidence in me as well to keep me in there, to continue to fight until the buzzer went off."

"A lot was my fault," Miles said, perhaps alluding in part to the fact he was called for traveling with 36 seconds left in OT with KU down by five that all but sealed the outcome. "I had too many turnovers in critical times of the game. I didn't do my part. We made bonehead plays, myself in particular. I wish I'd played better, but I give Georgia Tech credit, Jack credit for winning the game."

The Jayhawks drove back to Lawrence after the game ready to rest up and heal some injuries after a long season.

"It's a disappointment, it's obvious," Langford said. "I mean, we are smart. We know just because we went to the FInal Four our first two years doesn't mean it automatically puts you in there. You handle it. We are going to go back, take care of our wounds and get ready for next year."

"Coach mentioned in the locker room only one team gets to finish with the win, and we would have liked to have been that team," Simien added. "It was one of our goals to make it back to the Final Four. But some of us still have time to get back in there next year to take another shot at it."