Himes has handle on ‘stuff’

Kansas University's first football practice is one month from today, and the Sept. 4 season opener against Tulsa is nearly two months away.

"This is the time of year when all of our Nike stuff starts coming in," Himes said. "Here in the next few weeks, we'll get 800 pairs of shoes and a 1,000 pairs of gloves. Everything we get comes right now. The only thing we hold back until September is winter coats."

Himes and his staff of nine student managers have to make sure it all gets to the right place before players report for preseason camp Aug. 6.

"We fill a box for each player with T-shirts, socks, practice jerseys ... everything they need for two-a-days," said Himes, who said the boxes were left in the players' lockers the day they report for camp.

What about all those shoes? KU's 100 or so players are supplied with a variety of footwear, including different pairs for the weight room, travel, games, practice and various playing surfaces. Coaches, managers, trainers and the video staff are outfitted as well -- and not just with shoes.

"There's a lot of people we take care of," Himes said.

Himes fills a bag for each member of KU's travel party. That's hard to do in July, considering the Jayhawks won't make a road trip until Sept. 18 at Northwestern. Under Big 12 Conference rules, KU can take a maximum of 70 players on conference road trips, and the travel squad can change from week to week.

"I'll make a pile of XL, XXL and XXL," Himes said. "When we start picking out the travel roster, I start assigning numbers to bags. It's easier to do it that way than waiting a week before the game. If I stay ahead of the game, that helps."

Himes should know. He's been getting the Jayhawks equipped for games and practices since he came to KU from Kent State with coach Glen Mason in 1987. 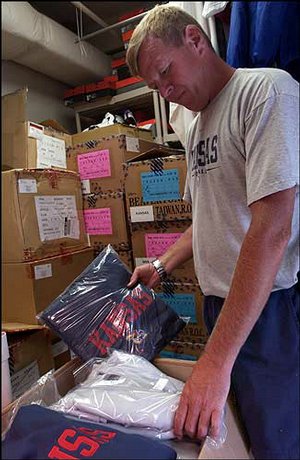 About half of KU's gear already has been delivered, sorted through and put away. Shoulder pads have been sent out to be sanitized and returned, while helmets were sent out to a company that sanded them down and repainted them.

KU's game pants and blue jerseys are in as well. Now Himes must make sure that the right names are sewn on to match players' numbers.

Of course, there's still more to come. Nike, KU's official athletic supplier, sent its first shipment in early June. By the time one load is put away, it's time for the next wave.

"They try to put a few weeks in between shipments," Himes said. "If they sent it all at once, it would be a disaster."

Himes was head equipment manager for three seasons at Kent State before following Mason to KU. Entering his 17th season at KU, Himes has worked for three head coaches. He could have followed Mason to Minnesota in 1996, but a couple of things kept him here -- wife Ganis is a Lawrence native, and the Minnesota weather was a bit too extreme.

"I went up there for an interview," Himes said. "It's cold. There was snow up to my knees. I was like, 'Geez. You've got to be kidding me.'"

Himes stayed in Lawrence. The couple owns a seven-acre farm near Clinton Lake with seven horses, six dogs and a cat. The Ohio native is no farmer, though. He doesn't have time.

"You're always busy," said Himes, whose summer duties also include setting up the practice field with cones, hurdles and other obstacles for running drills. "In the winter it slows down, but I'm here whenever the players are here. During the summer, the players have workouts at 6 a.m., and the last one is at 4."

Not that he's complaining.

Himes -- who earned a Master's Degree in athletic administration from KU in 1993 -- went to Kent State to become an athletic trainer and earned a degree in physical education in 1983. He didn't, however, spend much time taping ankles or treating injuries.