Kansas University athletic director Lew Perkins wasn't fretting about the athletic department's needing to come up with about $7,000 for a new set of goal posts Saturday afternoon.

He was way too happy about KU's 35-14 football victory over No. 23 Missouri -- and the fact nobody was injured knocking down the north and south goal posts -- to fret about petty cash.

"I talked with the student-body president right before they went out (on field after final horn). I said, 'Just make sure nobody gets hurt. That's our only concern,''' Perkins said. "I thought the kids were great. It was wonderful. The tradition, I hear, is to take it up to Potter Lake and throw it in there.

"I really thank the police officers and Ralph Oliver (director Office Public Safety) and his staff doing a great job and the fans behaving very well."

Game-day security and police officers stood by the goal posts until it was obvious they couldn't prevent thousands of fans from downing the posts.

"I think the plan was to try to stop it, but if we realized quickly it was not going to be possible, you just let it go and see if you can do what you can to prevent people from getting hurt," KU associate AD Jim Marchiony said. "When you see it happening, your only concern is people's safety. That's what you are scared about. People have died doing that.

"The enthusiasm, the atmosphere was great all week," Marchiony added of campus. "Not only is Kansas-Missouri a big rivalry, but you are talking about the turnaround of a program and kids working hard and students waiting a long time for this."

Perkins is thrilled for KU's junior and senior football players.

"They have gone through some rough times," he said. "I am so pleased for them, Mark (Mangino) and his coaching staff." 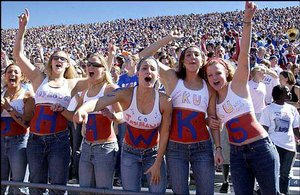 Members of Kansas' swimming and diving team celebrate from the front row.