Manhattan — With Bill Whittemore, Kansas University's football team might have stood a chance against Kansas State.

Without him, the Jayhawks had none.

Whittemore -- the nation's second-ranked quarterback and the Jayhawks' offensive sparkplug and emotional leader -- suffered what appeared to be a collarbone injury in the final minute of the first quarter, and the Jayhawks suffered their 11th straight loss to their in-state rivals, 42-6, Saturday at KSU Stadium.

Whittemore's injury is devastating. The senior captain led a KU offense that ranked 10th in the nation with an average of 469.6 yards per game.

Against KSU, Kansas (5-3 overall, 2-2 Big 12 Conference) had 76 yards in one quarter with its starting quarterback and 84 yards in three quarters without him.

"It's unlikely you'll see him again this year," said KU coach Mark Mangino, whose team has three games before the season finale Nov. 22 at home against Iowa State. "There's an outside chance he'll play in the Iowa State game, but it's going to be a real stretch for him to play in that game.

"We've got to move on. We've got other quarterbacks in our program, and we've got to get them ready to play. There are no excuses. We dressed 70 guys today, and one of them got hurt. The 69 others played and didn't get it done."

"Bill is a talented, vital segment of their football team," Snyder said. "He means an awful lot to them, and I'm sure it has a lot of emotional impact on them -- although they weren't about to cash it in. But I'm sure it wouldn't have been over as quickly had Bill remained in the game." 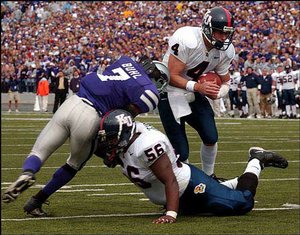 Kansas University quarterback Bill Whittemore (4) rushes as center Joe Vaughn blocks out Kansas State's Josh Buhl (7). Whittemore suffered what is believed to be a season-ending collarbone injury with just a few seconds left in the first quarter, and the Jayhawks never recovered in a 42-6 loss Saturday at KSU Stadium.

Trailing 7-0, Whittemore drove the Jayhawks from the KU 38-yard line to the K-State three. From there, he rushed up the middle for two yards and was buried in a pile of defenders, and KU settled for a field goal to make it 7-3.

Whittemore went to the sideline with 26 seconds left in the first quarter and soon after headed for the locker room. He did not return.

It was the fourth time Whittemore had a season ended or interrupted by injury, including last year when he missed the final three games because of a knee injury.

"If he truly is done -- and that possibility exists -- it's painful," Mangino said. "He's had a painful career. He's such a playmaker, such a great player, such a great kid. The players look up to him. We all respect him. I feel bad for him."

KU gained just five first downs without Whittemore and crossed midfield only once.

On Kansas State's first play after the fumble, receiver Davin Dennis beat backup cornerback Shelton Simmons for a touchdown catch in the end zone. Simmons was in for starter Donnie Amadi, who injured his right knee early in the first quarter.

And the rout was on.

From midway through the first quarter to late in the third, the Wildcats (6-3, 2-2) scored TDs on six of seven possessions.

"Our defense played well at times, but we left them on the field too long," Mangino said. "We had too many three-and-outs."

Luke's botched handoff was the sophomore's only play of the game. Third-stringer John Nielsen -- a junior-college walk-on -- went the rest of the way. He completed 8 of 12 passes for 33 yards -- an average of 4.1 per completion. 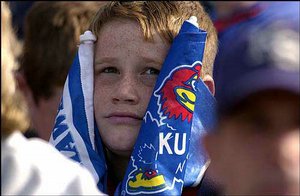 Mangino said the coaching staff would decide by Tuesday whether to use true freshman quarterback Adam Barmann Saturday at Texas A&M.

Kansas scored on its opening drive of the second half when Johnny Beck drilled a season-long, 51-yard field goal. Beck, who entered the game 6-of-11, also hit from 18 yards in the first quarter and accounted for both of KU's scores.

"It's a confidence-booster for me to hit from any distance," the junior said. "The last two years I haven't been up to my par."

Fullback Victor Mann and quarterback Ell Roberson scored on a pair of one-yard touchdowns, increasing KSU's lead to 42-6. It marked the seventh year in a row Kansas State (6-3, 2-2) scored 40 more points against Kansas.

K-State finished with 395 yards and 25 first downs. Roberson rushed for 103 yards and two TDs and passes for 138 yards and another score.

The Wildcats have won two in a row after a three-game losing streak. 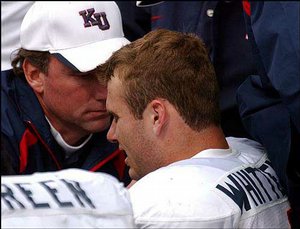 KU trainers work on injured quarterback Bill Whittemore's right shoulder area after Whittemore was injured on a third-and-goal play in the first quarter.

"I think we're getting better," Snyder said. "That is critical for us to do exactly that."

Kansas State outgained KU 227 yards to 40 in the second half. The Jayhawks' inability to sustain a drive and Curtis Ansel's 37-yard punt average continually gave the Wildcats good field position.

The Jayhawks remain one victory from becoming bowl-eligible. They will go on the road again Saturday at Texas A&M.

"We didn't play well, but all is not lost," Mangino said. "We're 5-3. We have a chance to control where we're going. We're disappointed we played so poorly. We didn't keep our poise the way we should."