The once-proud Buffaloes were beat up all week for having lost three straight, including an ignominious setback to lowly Baylor.

Then along came the Jayhawks, who, despite another big offensive game, were their own worst enemies in a 50-47 overtime loss to the Buffs Saturday at Folsom Field.

"A few mistakes here and there cost us the game," said sophomore running back Clark Green, who finished with 103 yards rushing and four catches for 72 yards.

Kansas University scored 35 or more points in its fifth consecutive game for the first time in the football program's 113-year history.

But KU couldn't overcome mistakes by its defense and special teams.

"It could have been a big victory for us," said senior quarterback Bill Whittemore, whose 422 passing yards and 467 total yards both ranked second in KU history. "It would have put us at 5-1. That sounds a lot better than 4-2. We feel like we should have been the ones celebrating." 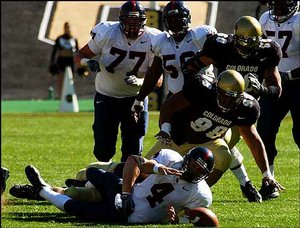 Kansas University quarterback Bill Whittemore (4) scrambles to pick up a fumble in the second quarter. The Jayhawks didn't lose any fumbles, but they had enough other mistakes to help Colorado take a 50-47 overtime victory Saturday in Boulder, Colo.

Perhaps the most costly mistake came toward the end of regulation, when a pass-interference penalty against KU on a third-and-seven from the Buffs' 24 gave Colorado a first down.

CU took advantage and drove for the game-tying score, a 23-yard field goal from freshman kicker Mason Crosby that made it 44-all with 14 seconds left in regulation.

"That's the kind of thing kickers dream about," CU coach Gary Barnett said of the score that forced OT. "I was excited for Mason, and I was happy for him. I felt like the way the kids had fought back, he was going to make it."

"We should have won the game today, and we didn't do it," said KU coach Mark Mangino, whose team plays host to Baylor Saturday. "The next-best thing is to learn some lessons from it so we can get better and improve in those areas."

It was a shootout from the beginning.

Klatt completed 38 of 54 passes with two touchdowns and one interception. His 419 passing yards were the fourth-most ever against KU.

Colorado (3-3, 1-1) was coming off a loss to Big 12 South doormat Baylor, but Klatt -- who had led CU to victories against Colorado State and UCLA before suffering a shoulder injury -- was making his first start in three games.

"That was an exciting and fun game to play," Klatt said. "This team battled back like we did in the first two games."

Colorado took the early lead after KU senior Curtis Ansel shanked a 14-yard punt out of bounds and had another blocked by Derek McCoy. Those two plays led to 10 points and a 17-7 lead.

Sophomore linebacker Nick Reid stopped a pair of CU drives in the first half with a fumble recovery and an interception. Both turnovers led to KU touchdowns.

Green's nine-yard TD run put KU ahead 28-24 with 2:31 to play in the first half. Colorado drove into KU territory before Reid picked off Klatt's pass and returned it to the CU 45 with 39 seconds left.

Four plays later, Whittemore lofted a Hail Mary into the end zone, and Rideau tipped it to Charles Gordon for a touchdown and a 35-24 halftime lead.

"I'm basically playing the tip," Gordon said. "When the ball was tipped it fell right into my hands."

CU opened the second half with a 15-play, 80-yard drive and pulled within 35-30 on Daniel Jolly's two-yard run.

CU, which had been averaging 2.26 yards per carry, came back with an 11-play, 75-yard drive capped by Jolly's one-yard TD. CU, which had failed on a two-point conversion earlier, tied it at 38 with Klatt's pass to D.J. Hackett.

Kansas took its final lead with 8:55 to play when Mark Simmons hauled in a five-yard TD pass from Whittemore.

"It hurt my hand like hell," Washington said. "It was like somebody held my arm up and kicked it as hard as they could."

Colorado had been limited to less than 100 rushing yards in four straight games before Saturday. Calhoun had 135 yards, and CU finished with 179 yards rushing and 598 total yards.

The Jayhawks entered with the second-fewest penalties in the Big 12, but had six for 57 yards.