"No question it's a top-five class, maybe a top-three or top-four class nationally," gushes Mike Sullivan, an analyst for rivalshoops.com and The Sporting News.

"I would think it's a class that Kansas fans would be excited about," added Sullivan, of high schoolers Alexander "Sasha" Kaun, Russell Robinson and Darnell Jackson, who have filled the Jayhawks' three available spots for the incoming class of 2004.

"Not only are these three of the top players in the country who will receive McDonald's All-America consideration, but two are from places Kansas hasn't recruited much before. Kansas has shown it can be a factor in the East."

Indeed, it's not just whom the Jayhawks will sign Nov. 12 -- the first day of the weeklong early signing period -- that impresses recruiting analysts like Sullivan.

It's where two of the players are from that's especially intriguing.

Kaun, a 6-foot-11 center from Tomsk, Russia, who has attended Florida Air Academy in Melbourne, Fla., the past two school years, and Robinson, a 6-2 guard from New York, live east of the Mississippi River -- nonfertile ground during the 15-year Roy Williams era. Jackson, meanwhile, is 6-9 from Midwest City, Okla.

West fruitful in past

Williams, who had great recruiting success in the West and Midwest, rarely ventured East. He felt there simply were too many schools close to major metropolitan areas to compete against. Meanwhile, he felt UCLA and Arizona were the only giants to contend with out West. 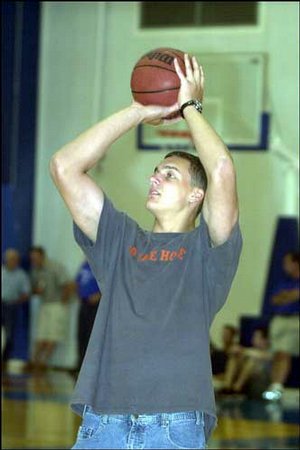 Alexander "Sasha" Kaun, who committed to Kansas University this week, takes a shot on Sept. 6 at Horejsi Center during his recruiting trip to KU. Kaun was unable to play pick-up basketball on the trip because of a stress fracture in his foot.

Self has decided to attack the East with associate head coach Norm Roberts, who was born and raised in Queens, N.Y., and has many contacts there.

"I would say Kansas is known and respected in New York," said 10th-year New York Rice High coach Maurice Hicks, who has won two of the last three New York state titles with the future KU combo guard, Robinson, in the starting lineup.

"I told Russell that he will be just another guy putting on the uniform there (at KU). They have had so many great players there, it's almost like living up to a standard. It's an honor to play there."

Hicks said he's enjoyed his communications with the KU staff the past several months.

"Coach Self appears to be as genuine as they come. Kids take to him," Hicks said. "And Norm Roberts ... he is a great asset to any head coach."

"Norm Roberts," chimed in Sullivan, who lives in New York, "is one of the top five assistants in America. He knows the East and everybody in the East knows him."

Florida not off limits

"I can tell you I run one of two Nike teams in the state of Florida and Bill and Kansas are more than welcome to recruit any of our players here," Topping said.

In fact, coaches in the East might have to start worrying about KU. Recruit A.J. Price of Amityville, N.Y., also visited KU this semester and was left quite impressed, ultimately choosing UConn.

"You are darn right ... with Norm Roberts, Kansas will be a huge factor in that area," said Shay Wildeboor of rivals.com, who spent much of the summer tracking KU's recruits at national camps. "Norm carries a lot of weight in New York."

"Russell Robinson ... I have seen him as many times as my wife," Sullivan quipped. "He's a relentless defender who gets in your face, gets a lot of deflections and can score.

"New York guards are special. They have that toughness," Sullivan added.

Robinson, who has played his share of New York playground basketball, is ranked No. 31 nationally by rivals.com after averaging 18 points, six rebounds and four steals last season.

"Russell will not back down from anybody," said Wildeboor, who watched Robinson hit the game-winning shot in several games for New York Gauchos AAU.

"If you need a basket with two seconds left to win the game, he will take the shot and gladly take the shot. He welcomes pressure situations. He's a typical New York guard in that he has an attitude about him."

Versatility a trait of Robinson

Robinson will play point guard for his high school this year, likely both the point and shooting guard slots at KU.

"He is more a wing guard who will do damage on the perimeter and put the ball on the floor," Wildeboor said.

The other two members of KU's recruiting class are inside players.

"Kaun is a beast. Had he not had an injury this summer he would be a Top 10 or 11 player in America," Wildeboor said of Kaun, who suffered a stress fracture in June.

"He has the biggest hands I've ever seen and has a great wingspan."

Then there is Jackson, a good buddy of KU freshman J.R. Giddens, who hails from Oklahoma City.

"Darnell wanted to be a Jayhawk from Day One," Wildeboor said. "I think it's important to get extremely talented guys from the area like Darnell who really want to be Jayhawks.

"He could come in right now (this season) and be a big help on the defensive end. He is a scrapper, fighter, a warrior. He is chiseled. There's not an ounce of fat on his body. He can score. He has a good up-and-under move inside and has a good enough shot. I just don't think he'll be asked to score that much right away here."

"I really like Darnell Jackson, probably even more than most people," Sullivan noted. "He is a big-sized kid who will be a factor down the road."

Of KU's class as a whole, Wildeboor said: "It is a great class. I don't think six months ago Kansas fans would have expected this from a new staff just getting started. If you told me in April KU would have a class of Sasha Kaun, Russell Robinson and Darnell Jackson, I wouldn't have believed it."

Though KU has filled its 13 scholarship allotments for next year's team, there is always the chance Self will continue recruiting Malik Hairston, 6-5 from Detroit, who is down to KU, UCLA, Michigan, Michigan State and Virginia Tech.

Self, who cannot comment on recruits in accordance with NCAA rules, told the Journal-World in an Aug. 26 article that he, in theory, is not against oversigning.

"With scholarship limitations the way they are, the pool of players available late is not very large," he said at the time. "You may need to cover yourself for the best interest of the program. If I was very confident somebody would be leaving, I could see that (oversigning).

"Recruiting is a never-ending process," he noted. "You always have to be prepared."