Marian Washington, now in her 31st year at Kansas University, has been named to the Women's Basketball Hall of Fame.

Washington and four others will be inducted next June into the shrine in Knoxville, Tenn. The hall, opened in 1999, will make the official announcement of the new honorees Sunday during the State Farm Tipoff Classic in West Lafayette, Ind. 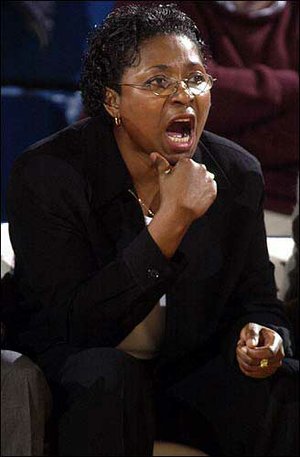 Kansas University women's basketball coach Marian Washington instructs her players during an exhibition game Monday at Allen Fieldhouse. Washington has been selected for induction at the Women's Basketball Hall of Fame.

Washington is a native of suburban Philadelphia and attended West Chester (Pa.) State. She played there in the first formally organized national collegiate tournament for women, in 1969. She also played AAU ball for the Raytown (Mo.) Piperettes.

Washington was on the 1971 U.S. team that played in the World Championships in Brazil. Washington took over the KU basketball program in 1973 and has a 551-337 record with 11 NCAA Tournament appearances.

Earlier this year, Washington was feted at the Black Coaches Assn. convention when she was presented with a lifetime-achievement award. Washington served two years as president of the BCA (1994-95) and was the first woman to hold that position.

Not only is she the dean of Big 12 Conference coaches, she ranks sixth on the NCAA active coaching-longevity list.