The Jayhawks netted a total of three points on those prime scoring opportunities in a 24-3 loss.

"We need to do a better job of protecting and catching the ball," KU coach Mark Mangino said. "Our offense moved the ball well, but we could not get it in the end zone. The turnover cost us big today."

No. 19 Nebraska entered the game leading the nation in turnover margin at plus-17 and left Memorial Stadium at plus-19. KU freshman Adam Barmann was intercepted three times -- including a pick at Nebraska's one-yard line -- and freshman running back John Randle lost a fumble at the one.

"I thought I made a few bad mistakes that I shouldn't have thrown -- a couple of passes I forced in there," said Barmann, who finished 24-of-34 for 204 yards. "I thought we played pretty decent, we just couldn't execute. We can't do those kinds of things against Nebraska and expect to win."

KU coughed up the ball at inopportune times and suffered its 35th consecutive loss to Nebraska.

It started in the first quarter when Barmann threw an ill-advised pass that was picked off by safety Jerrell Pippens. Nebraska took over at KU's 42, and the Cornhuskers later took a 10-0 lead on a one-yard touchdown run by fullback Steve Kriewald.

Trailing 10-3 in the third quarter, Barmann engineered a 10-play, 73-yard drive to the Nebraska seven. But safety Daniel Bullocks intercepted Barmann's pass at the one.

KU got the ball back after a Nebraska fumble, but Barmann was picked off again. The freshman wasn't at fault this time. Sophomore receiver Mark Simmons bobbled a pass, and safety Josh Bullocks grabbed the deflected ball at the KU 38. 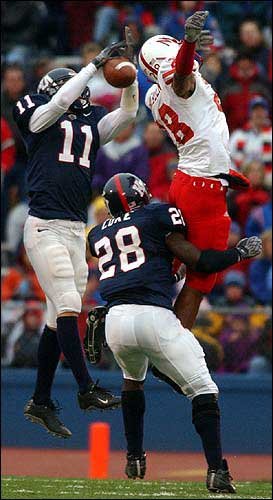 Kansas University's Jonathan Lamb (11) intercepts a pass intended for Nebraska's Isaiah Fluellen in the first half as KU's Dan Coke defends. It was one of only two Husker turnovers in a 24-3 victory over the Jayhawks Saturday at Memorial Stadium.

The miscue led to another Nebraska touchdown and a 17-3 deficit four plays later.

Trailing 24-3 in the fourth quarter, KU mounted a 12-play, 69-yard drive that ended when Randle fumbled at the one.

KU's three-point performance was its lowest of the season, and Jayhawks fell far short of their 33.1-point scoring average.

"It is frustrating," Barmann said. "It's something we've got to work on. But I have confidence in our team. We've scored all year in the red zone, so I don't think it's going to be a problem for us."

Barmann has completed 49 of 71 passes for 498 yards in two games since replacing injured senior Bill Whittemore.

"His performance was good enough to win," Mangino said.

But penalties were a big problem, too. The Jayhawks were flagged eight times for 78 yards.

One one third-quarter drive alone, KU's defense was whistled for facemask, roughing-the-passer and personal-foul infractions. Nebraska didn't score on that drive, but the Cornhuskers did on their next possession when another personal foul aided a touchdown drive.

"Penalties killed us," junior defensive back Tony Stubbs said. "It was penalty after penalty."