No. 2-seeded Jayhawks bound for OKC

With Long Island iced teas on the table and chicken wings on the way, Kansas University basketball fan Marc Chrisco really got what he ordered when CBS served up the top seeds for the men's NCAA Basketball Tournament: Arizona, Kentucky, Texas and Oklahoma.

No Kansas? No problem.

"I think it's better that KU got a No. 2 seed," Chrisco said, surrounded by friends for the selection show at Henry T's. "It'll fire 'em up now. And they need it -- after they way they folded against Missouri."

The Jayhawks, seeded second in the West Regional, will put Saturday's Big 12 Tournament loss behind them by traveling to Oklahoma City for a first-round matchup at about 8:40 p.m. Thursday against Utah State. The game is scheduled to start at 8:40 p.m.

The 20,000-seat Ford Center already is sold out, and Kansas University's allotment of 550 tickets promises to go fast. The scant supply will be divided among students, faculty, staff, team parents and members of the Williams Education Fund.

"The Kansas fans are resourceful," said Jay Hinrichs, fund director. "I'm sure with the venue being five hours away, they'll find a way."

Officials expect thousands of Jayhawks to flock to Oklahoma City, which is about midway between Wichita and Dallas, two of KU's most populous alumni bases.

The KU Alumni Association will set up camp in the city's Bricktown area, a downtown dining and entertainment district within walking distance of the Ford Center and several hotels. Watch parties, rallies and 2,000 crimson-and-blue pompons and 5,000 Jayhawk stickers will be available for anybody looking to root the team on.

"It's a park-once situation," said Kirk Cerny, an association senior vice president who coordinates fan activities. "It's where all the action will be." 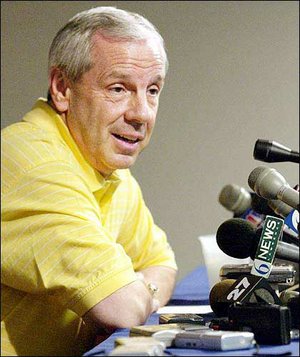 It's certain to be busy. Also playing in Oklahoma City is Oklahoma University, whose campus is less than 30 minutes down Interstate 35.

While the Sooners and the Jayhawks will share the tournament site, they'll be competing in different brackets. KU's in the West, while Oklahoma is tops in the East.

Playing on KU's side of the bracket in Oklahoma City -- and therefore potential second-round foes -- are Arizona State and Memphis.

But it was the top names on the other side of the West bracket -- particularly those playing in Salt Lake City -- that drew the most attention among KU fans at Henry T's.

Their joyful satisfaction of securing a comfortable No. 2 seed and a site close to home had turned to consternation as announcer Greg Gumbel announced the West's No. 3 seed: Duke. 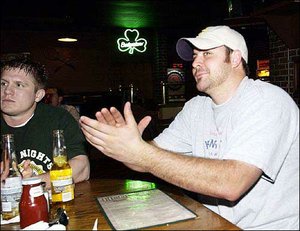 And that came before fans realized that Arizona had scored the top seed, and that Illinois slid into the No. 4 slot.

"I'm shocked," said Jim Bird, back in town after observing the Missouri loss in Dallas. "Arizona, KU, Duke, all in the same bracket? Beat Duke, then Arizona, then Kentucky (No. 1 in the Midwest)? If you can win all those, you deserve to win a national championship."