Their time is coming

Eager to show his stuff in a dunk drill, J.R. Giddens lobbed the ball off the backboard, then soared high, grabbed the rock and slammed it through the hoop.

"That was a mini-'Late Night,'" Giddens, a former Oklahoma City John Marshall High guard, said after the current KU players fell to a KU alumni team, 80-77, in the annual camp pick-up game.

"You go out there to showcase your skills, show people what you've got, have fun and see all the smiles on the little kids' faces. When we walked in they said, 'Who is that?' Hopefully they know my name now when they see me on the street," Giddens said.

Giddens grinned when asked if fans could expect to see him rattle the rim during real games the next four years.

"Of course," he said. "Don't let me go through the middle of the lane. I'm getting stronger, bigger. My foot feels good. I can go above the rim now, like LeBron (James)."

Giddens' left foot, which he hurt in the dunk contest at the McDonald's All America game, may feel fine, but requires surgery to repair a stress fracture. 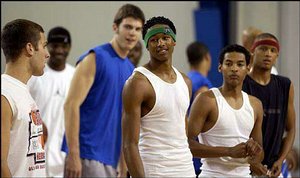 Giddens said Wednesday he would have a pin inserted in his left foot later this summer, probably after he makes an appearance for the U.S. in the Global Games, set for June 29-July 5 in Dallas. The pin will hold bones in his foot together and help heal his stress fracture.

He should miss about a month of basketball.

"It feels fine, now, but I need to be smart. I don't want it to get hurt during the season. This is the summer and it's time to get it healed, now," said Giddens, who hit one three-pointer and had a vicious follow dunk after an Omar Wilkes miss.


He said he had recovered nicely from arthroscopic knee surgery April 17 which cleaned debris from his knee. A strained right patella injury had shelved him at the end of his senior high school season.

"It's fine now. It's cool now," Padgett said, adding, "that was fun today. It gave us a chance to play with each other for the first time before all the campers."

Jeremy Case, a 6-foot guard from McAlester, Okla., who is a prolific three-point shooter, hit one pull-up jumper and took the ball to the hole a couple times. 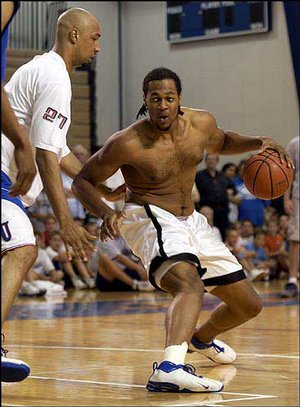 "It was awesome," Case said of playing before 1,000 campers. "I was kind of shocked at first. I didn't think it'd be a big deal like that. I played all right. Anytime I can play against that kind of competition, it's good for me."

"We've been playing for about two weeks now," Case said of pick-up action. "It's not been shocking, but the pace is faster than high school. Guys are stronger and you've got to play harder."

Case said all the newcomers had one thing in common: "We are all kind of skinny," he said with a laugh. "I'm 160 (pounds). I need to be at least 170. We've been lifting two hours a day and doing agility work."

"The new guys are sweet, man, sweet," said ex-Jayhawk guard Bradford, who played pro ball in Tokyo last year. "Jeremy shoots it really well. David works hard inside and is a great defender inside. Omar is smooth. He handles it, shoots it midrange. J.R. ... once he gets his jumper down, the way he handles that thing, he'll be tough to stop."

Ex-Jayhawk Thomas, who will play on the Orlando Magic's summer-league team, also likes the rookies. 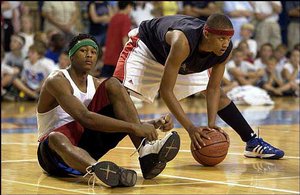 Incoming KU players J.R. Giddens, left, and Omar Wilkes get ready for the game between current and former Jayhawks at the KU basketball camp.

"For knowledge of the game and coolness, Omar may be a cut above the other freshmen. He is heady, athletic," Thomas said. "When David gets his footwork down and gets stronger, he'll be tough to stop. All will need to get tougher. The transition from high school to college .. the increase in the level of intensity is tough."

"I love coach Self. You can tell him anything," Giddens said. "I respect coach (Roy) Williams, but there's no frown on my face at all." 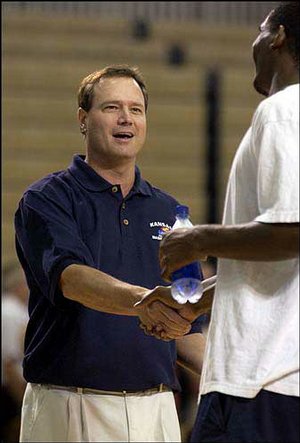 "Coach Self is a great guy who has a lot of energy," Case said. "He's easy to get along with and makes you feel so comfortable."

"I love Bill Self," Bradford said. "He recruited me out of high school (to Tulsa). It seems his staff is pretty good people, too."

"Charlie doesn't need a guaranteed contract. There are 17 guys (currently) on rosters that were picked in the second round last year," Villanueva's friend, Nate Blue, told the New Haven Register. 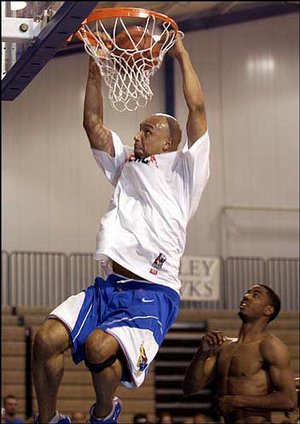