Monday was Perkins' first day on the job, and it turned out to be a longer day than the former Connecticut AD expected. That'll happen when you forget to switch your alarm clock from Eastern to Central time.

"It's called being stupid," Perkins said during an informal meeting with the media Monday evening.

Perkins arrived late Sunday afternoon at Kansas City International Airport -- his connecting flight was 21/2 hours late because of thunderstorms in the Chicago area -- and was picked up by Jay Hinrichs, director of the Williams Educational Fund.

After having a late dinner with men's basketball coach Bill Self, Perkins was driven to a two-bedroom apartment, where he'll stay until his wife, Gwen, arrives in early August. She is under contract with the East Hartford School District until July 31.

Perkins unpacked, watched a little television and set his alarm for 5:30 a.m. because Hinrichs was going to pick him up at 6:15 a.m. 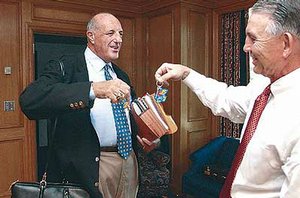 Eventually, Hinrichs arrived, and they drove downtown for breakfast at Milton's, where Perkins had a couple of poached eggs and met "three or four boosters."

Then it was off to Parrott Complex where he met for three hours with Drue Jennings, who has been keeping Perkins' chair warm since Al Bohl was fired in early April.

Jennings, a retired CEO, has been anxious to return to his former status since Perkins was hired June 10.

"When I got there, Drue was dangling the keys to the office over the bannister," Perkins said. "He is one of the great people in the world. We talked about all kinds of things -- family, KU and the future."

Later, Perkins took delivery of a car, one of the traditional perquisites of the KU athletic director, and met about 90 minutes with Chancellor Robert Hemenway.

Perkins had time, too, for one of his favorite pastimes -- meeting with student-athletes. Basketball players Blair Waltz and Wayne Simien introduced themselves, as did a couple of track athletes.

"That was great," Perkins said. "That was the best part of the day."

"I'd never met him before, and I was in awe," Perkins said. "We talked about fund-raising and more fund-raising." 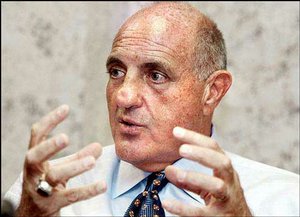 New Kansas University athletic director Lew Perkins makes a point during an informal news conference with media representatives. Perkins met the press Monday at the end of his first day on the job.

Generating revenue always has been the No. 1 priority of an athletic director and no one knows that more than Perkins, whose crowning achievement during his 13 years at UConn may have been lobbying the state legislature for $90 million to build a football stadium for the Huskies.

At Kansas, Perkins has run smack-dab into the Allen Fieldhouse seating controversy. A couple of hundred ticket holders have been affected by a decision to ask them to donate to the Williams Fund in order to retain their seats.

During the next several weeks, Perkins will be traveling the state meeting with KU alumni and friends and no doubt some of those ticket holders.

"I know everyone wants to talk about the ticket policy," he said. "But it's something we need to do. I don't know about around here, but everybody on the East Coast is doing it. Sometimes in our business you have to make decisions you're not happy with."


Perkins already has a jammed -- he called it "crazy" -- travel itinerary that will begin when he meets the board of trustees of the KU Endowment Assn. at their meeting Wednesday in Pittsburg. In the next two weeks, he'll also be in Emporia, Wichita (twice), Winfield, Topeka, Dodge City and the Kansas City metro area (twice).

"We ARE the state university, and we need to get out and be everywhere," Perkins said. "We're going to go to the people. We're not going to wait for them to come to us. I need to let them know who I am and what I stand for."

Perkins stands for success. At 58, he is a man at the top of his game. To lure him to KU, Hemenway dangled a $400,000 salary plus an annuity and the standard perks of automobiles, country club memberships, life insurance, etc.

"Everybody has to understand this is a business, a serious business with a $27 million budget," Perkins said. "We've got to start winning. That's what it's all about."

When he was hired in June, Perkins mentioned he felt KU had lost the swagger he remembered so vividly when he was AD at Wichita State from 1983-87. Perkins said it again Monday, and he'll no doubt repeat it as he travels around the state.

"When I was at Wichita State, we hated KU ... hated KU because they were so good," he said. "At Connecticut they hated us, and I took that as a compliment."

During the last four or five years, more or less coinciding with KU becoming a member of the Big 12 Conference, the Jayhawks have basically been trump poor with one ace (men's basketball) and a handful of low clubs and diamonds.

Perkins' challenge is to turn those low clubs and diamonds into face cards.

"Is it going to be hard? It's going to be a bitch, a real bitch," he said. "Anything is possible, though. Can we do it here? I really believe it. History, tradition ... it's all here. But it's not going to be a piece of cake."