Fort Worth, Texas — Michael Lee rather would have been wearing a Kansas University basketball jersey than a spiffy black suit and turtleneck Monday at Texas Christian's Meyer Coliseum.

"I'd like to be playing," said Lee, the Jayhawks' junior guard who suffered a broken right collarbone at practice Friday and had his arm in a sling on the sidelines Monday, "but at least I can come out here and cheer. I can still pump my left fist."

Lee's mood has improved considerably since Friday, when he ran into Bryant Nash on the final play of practice.

Lee was trying to bust through a Nash screen.

"I'm not depressed," Lee said. "At first I was more upset, realizing I'd broken it. It was nobody's fault. If anybody's, it was my fault. I was a little out of control trying to run through the screen. We banged shoulders. Mine popped out."

Lee said doctors indicated he had a fractured clavicle and in a best-case scenario could return for the Colorado game Jan. 5.

"It comes with the territory," said Lee, who was out six weeks last summer after spraining his right knee. "Getting injured and sitting out this summer will help me deal with this."

He thinks the Jayhawks will be OK without him. 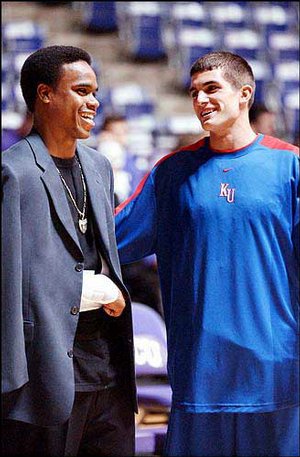 Kansas' Michael Lee, left, chats with teammate Stephen Vinson before the TCU game. Lee, who broke his collarbone in practice Friday, cheered the Jayhawks Monday in Fort Worth, Texas.

"Everyone is stepping up," Lee said. "J.R. (Giddens) is coming along well. Jeff Hawkins can shoot and defend, and Jeremy Case is a good shooter. Everything will be all right."

Langford to be honored: A Texas-sized celebration has been planned for Keith Langford tonight at his alma mater, North Crowley High.

Langford -- North Crowley's all-time scoring and rebounding leader and now a junior at Kansas University -- will have his No. 5 jersey retired at halftime of tonight's Coppel-North Crowley High contest.

"We're all so proud of what Keith has accomplished. He is a class act, the total package on the court and in the classroom," North Crowley coach Tommy Brakel said.

Brakel attended Monday's KU-TCU game with a large contingent of fans from the high school. Forty or so of Langford's relatives also attended.

"Our school owes him a lot. The school opened Keith's sophomore year. He could have stayed at Crowley (High) -- students there at the time had the choice of staying -- but he elected to come here and help us build something," Brakel said.

Langford, who scored 1,844 points and grabbed 850 rebounds in three years -- he scored a school-record 46 points in one game and grabbed a record 20 rebounds in another -- will be presented with his original North Crowley jersey No. 5 tonight.

Another of his jerseys will be framed and placed in a glass trophy case with one of his KU No. 5 jerseys.


"We're going to leave room for another," said Brakel, leaving room for the possibility Langford will play in the NBA someday.

The 6-foot-4 Langford already has come a long way in starring at a major power like Kansas. He was considered a lukewarm prospect out of high school, first committing to Mississippi, then changing his mind, reopening his recruiting and tapping KU over Oklahoma and others.

"At first we thought, 'Can he play in the SEC?'" Brakel said of the Southeastern Conference, "then when Kansas jumped in, it was weird. We had kind of a calm confidence he'd be successful there.

"He showed great promise here. He could throw it down. He was a good perimeter shooter. His bread and butter was his ability to knife to the basket. He's shown all those things and more at Kansas." 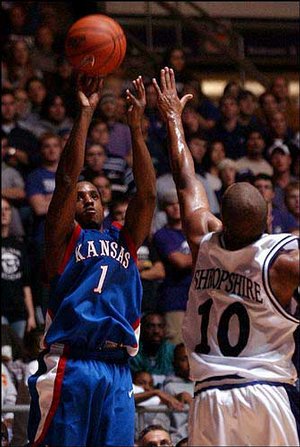 Jeff Hawkins, who finished with 19 points and hit five of seven three-point shots, launches a three against TCU's Marcus Shropshire in the second half. Hawkins helped key a second-half rally that carried the Jayhawks to an 85-66 victory Monday in Fort Worth, Texas.

Langford was to return to Lawrence on his own today. His Jayhawk teammates flew back via charter Monday night.

"I've known for a while now that they were going to do this. It's a great honor," Langford said.

"He's hanging in there," said Dougherty, who helped coach Hinrich three years at KU. "You can tell he's frustrated. He has such a work ethic and commitment to the game, he's frustrated.

"It's like Drew (Gooden) last year with Memphis. They started out 2-20. It's just tough for somebody when they play at a place like Kansas and are high draft picks and are on a bad team."

Of course, Gooden doesn't have it much better this year. His Orlando Magic are off to a dismal 1-15 beginning, while the Bulls opened 5-12. Both teams are into their second head coaches of the season.

Ticket package: TCU included the Kansas game in a special ticket promotion. Fans had to purchase tickets for four games to land a single-game KU-TCU ticket.

"I talked to coach Dougherty about that," Brakel said. "He didn't want everybody coming in just to watch Kansas. He wants fans to watch TCU and try to get as many in the stands on a continuous basis for his program. I understand his reasoning, but it did make it difficult for some students who can't afford $60 -- four games at $15 a pop."

Flights of fancy: The Jayhawks flew a Boeing 737-200 charter to and from the game in Texas. It's a charter with 56 first-class seats. The "Sky King" charter is used by 11 NHL teams and one NBA team.

The Jayhawks will fly the charter on six trips this year. 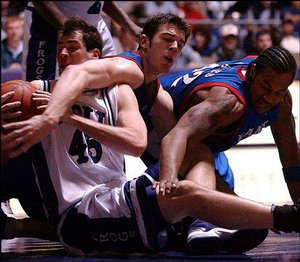 "This charter is less expensive than the typical regional jet charters most schools are using," KU assistant AD Larry Keating said. "It's a nice charter, which gives the guys some room and makes sure everybody can get back in time for class tomorrow."

Most schools are going to chartered jets in the wake of the horrible tragedy at Oklahoma State a couple of seasons ago in which a small jet went down in bad weather.