It's not Allen Fieldhouse with the Jayhawks on the hardwood, but it may be the next best thing.

If you want to cheer on the team with thousands of other fans Saturday but can't get a ticket to New Orleans, then Memorial Stadium may be the place for you.

For the second-straight year, Kansas University officials are scheduling a Final Four game-watching party at the stadium, complete with a pep band, pregame events and crimson-and-blue Mardi Gras beads.

The stadium's south gates will open at 4 p.m., about an hour before tipoff of the KU-Marquette game. Admission is free. Pregame festivities will include music, a Family Funzone with games and prize giveaways.

The 24-by-36-foot Megavision videoboard will show season highlights and regular CBS Final Four programming, including the game. A KU pep band, dance squad and Baby Jay mascot will be on hand. Concessions will be available on the west side of the stadium.

The event will be similar to last year's Final Four party. About 8,000 fans then braved frigid temperatures to watch Maryland defeat KU.

"It was cold last year," Cohen said. "Despite the weather, it was fun. This year the weather is looking much better. We learned despite frigid temperatures, people will come. Weather is not a barrier."

The forecast this weekend calls for highs in the upper 50s with a chance of showers. Lows Saturday night are expected to be in the 40s. 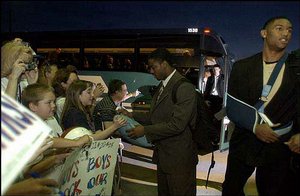 Parking lots on campus will be open. However, most roads through campus will be closed during and after the game. Dozens of cars and hundreds of people lined Jayhawk Boulevard after last Saturday's Elite Eight victory.

The university is trying to avoid riots and violence that have beset other communities after tournament games.

On Sunday night, seven people were arrested in East Lansing, Mich., when about 2,000 people gathered near campus after Michigan State's 85-76 loss to Texas. In 1999, similar riots broke out after Michigan State lost to Duke, with 134 people arrested and more than $250,000 in damage caused to the city and campus.

Lt. Schuyler Bailey, of the KU Public Safety Office, said other than a few shrubs being trampled, there had been little damage to KU's campus when the Jayhawks played in the Final Four. When KU won the championship in 1988, about 30,000 fans flocked to Jayhawk Boulevard, the heart of campus. He said there were no major incidents after last year's Final Four loss or after Saturday's victory over Arizona.

Bailey said he did not expect Kansas students and the community to take part in violence that has occurred at other universities.

KU has started a media campaign asking people to celebrate safely. The advertisements and posters feature coach Roy Williams and say "Jayhawk fans are the greatest when they celebrate safely."

"We're confident students will act in a way that would make Roy (Williams) proud," Cohen said.

Bailey said there would be extra officers on duty Saturday for crowd control.

"We want people to celebrate and have a good time," he said. "If we win, I want to celebrate, too."