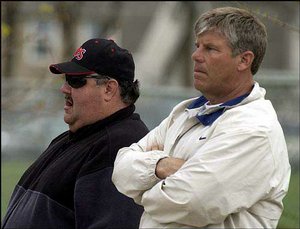 Probe aims to determine if Mangino went too far

Harris voices his support for coach

KU AD Perkins meets with players over concerns about Mangino

Mangino: 'It wasn't a big deal'

Lawrence High officials are tight-lipped, but they have taken some form of action against Kansas University football coach Mark Mangino because of a post-game incident.

Mangino's son, Tommy, who is the Lions' starting quarterback, was hit hard late in Friday night's 26-7 win over Olathe East and had to come out of the game. Afterward, the KU coach was seen yelling and pointing his finger at game officials as they left Haskell Stadium.

Abuse of officials whether by coaches, players or fans is a violation of the Kansas State High School Activities Assn.'s sportsmanship rule. Some form of punishment is mandatory from the host school.

"The school must take appropriate action and we have," Lawrence High principal Dick Patterson said.

Patterson declined to name the person although it was clearly Mangino because his tirade was witnessed by hundreds of people or to reveal his course of action.

"We handle all such cases on a confidential level," Patterson said. "It's between the student, the parents and the school."

For his part, Mangino declined comment, but the first-year coach did issue a non-apologetic statement through the KU media relations office that read: "The most important role I play in my life is that of a father, and I will do what is right for my children."

While it appeared Tommy Mangino may have suffered a concussion after he was tackled by Olathe East players, it was later determined Mangino's son was OK. He is expected to play in Friday's game at Olathe South.

Outbursts by disgruntled fans are not without precedent in Lawrence public schools. According to sources familiar with similar incidents, offenders customarily are banned from attending the next home game.

The Lions' next home game will be on Oct. 3 against Olathe North. That's a Thursday night contest, meaning Mangino would be able to attend becau`e the Jayhawks won't leave until Friday for their game the following Saturday at Baylor.

The Lions' other home games are against Free State on Friday, Oct. 25, and Friday, Nov. 1, against Topeka High. Mangino also would be able to attend those games because the Free State contest is followed by a trip to nearby Missouri, and the Topeka High contest by a home game against Kansas State.

It's also possible Lawrence High officials may have warned Mangino that any future incidents will result in a stiffer punishment.