Mangino has 'great admiration' for Snyder

There's no love lost between Kansas University and Kansas State, but the football coaches of those Sunflower State rivals claim that's not the case in their personal relationship.

"I think we have a very good relationship," K-State coach Bill Snyder said of KU's Mark Mangino during Monday's Big 12 teleconference. "I don't know what the issue is."

Snyder gave Mangino his first job as a full-time, Division I college assistant in 1991.

Mangino stayed in Manhattan for eight seasons, climbing from recruiting coordinator in that first season to assistant head coach in 1998. During that time, Snyder built KSU from Big Eight loser to Big 12 power.

Mangino and Snyder will meet as head coaches for the first time Saturday when Kansas plays host to Kansas State at 1 p.m. Saturday at Memorial Stadium.

Snyder and Mangino praised each other in late July during the conference's media day at Houston and again the following week during the Greater Kansas City Sports Commission football kickoff luncheon.

Still, fans and pundits have continued to speculate the coaches don't like each other and were simply making nice for the public.

It might be understandable if Snyder harbored resentment for what happened after the 1998 season. Former KSU assistant Bob Stoops left Florida, where he was defensive coordinator, to take the head coaching job at Oklahoma. He then raided Snyder's staff, hiring Mangino, defensive coordinator Mike Stoops (his brother) and defensive aide Brent Venables. 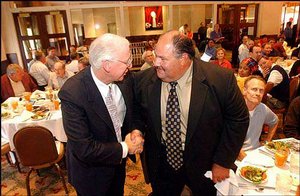 OU hadn't had a winning season since 1993, but Snyder's former aides immediately returned the Sooners to glory with a 7-5 record in 1999 and a Big 12 title and national championship in 2000.

Snyder is 111-51-1 in his 14th season at K-State, but has yet to win a conference title or guide his team to a national-title game.

Mangino said there was no feud with his mentor.

"It's a good relationship," he said. "It's one of respect. I have great admiration for coach Snyder. I got a chance in Kansas City at the kickoff luncheon to spend some time with him and talk about family and things like that. And I know it makes for good radio and good press, all the things that are assumed about our relationship and the way we feel about each other, but I can tell you that I have great respect for coach Snyder. If it was not for Bill Snyder, I would not be here at KU as the head football coach today. And he has had a big impact on my career, on my life, on the way I think and on the way I approach things.

"He and I won't be taking a snap Saturday. We'll both be on the sideline. It's our players that will be playing. And I want you to know that I feel strongly about him. And I know that there is a lot of things that make for good talk radio and make for good print, but only coach Snyder and I know the relationship that we have and how I feel about him and he feels about me. And that's the way that it will be kept." 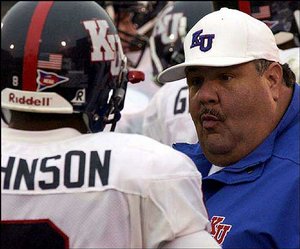 
Waiting on Whittemore: Kansas State, which has won nine straight games against its in-state rival, is a 31-point favorite in Saturday's game. Mangino could be without his starting quarterback, because junior Bill Whittemore injured his left knee during Saturday's 36-12 loss at Missouri and is questionable for the KSU game.

"Our medical staff, and our head trainer has been working extensively with him yesterday and again this morning," Mangino said. "They will not rule out the possibility that he can play. It just matters how good his range-of-motion continues to progress. We're going to get him on the practice field as soon as we can and if he can play, great, if not, we're willing to move on. We have other quarterbacks that we think are capable."

Mangino said he didn't expect a ruling on Whittemore's status until Wednesday or Thursday. If the junior can't play, senior Jonas Weatherbie will start against the Wildcats.


NU kickoff set: Nebraska officials announced Monday that kickoff for the Cornhuskers' Nov. 9th game against Kansas will be 12:30 p.m. The game was not selected for television broadcast and will not be video streamed on HuskersNside. NU officials also announced that 200 tickets returned by Kansas were available.