How sweet it is.

Kansas is back in the Sweet 16 for the second straight season thanks to a pair of victories one not so impressive, one very impressive last weekend in St. Louis. 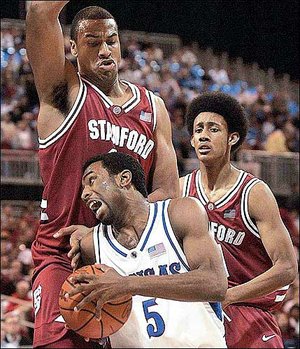 Keith Langford (5) and the Jayhawks shouldered their way past Stanford and Holy Cross to reach their second straight berth in the NCAA Sweet 16.

"We're happy to be in the Sweet 16, but nobody on this team is satisfied to be a top-16 team. We have high goals and still a lot of work to do to get where we want to go."

Just two wins from the Final Four, Kansas will meet Illinois on Friday night in Madison, Wis., with a berth in the Elite Eight at stake. A win would propel the Jayhawks into a Sunday matchup against Texas or Oregon.

"This feels good. We are still alive," senior Jeff Boschee said. "The best thing for me would to be winning my last game in a Kansas uniform. We'll play hard and lay it all on the line."

For a long time, it looked as if No. 16 seeded Holy Cross might become the first No. 16 seed ever to defeat a No. 1 seed in tournament play. 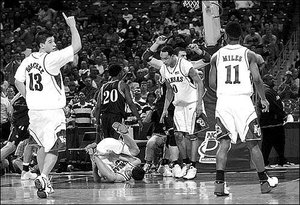 KU's Drew Gooden looked on in alarm when Kirk Hinrich went down late in the first half with a severe ankle sprain.

Things were scary for the Jayhawks at halftime, especially with junior guard Kirk Hinrich (nine points) carted off to an X-ray room after severely spraining his left ankle late in the first half.

The Jayhawks did finally right the ship.

Drew Gooden heated up for 13 of his 19 points the second half. Boschee iced three three-pointers for the Jayhawks, who made three of six threes to Holy Cross' four of 14. KU made 12 of 23 shots the second half for 52.2 percent and finished at 46.2 percent to the Crusaders' 33.3 percent mark.

"I was proud of the team and told them that in the locker room. You guys are the only ones who doubted that," KU coach Roy Williams said to reporters. "I know some (coaches) try to con you people sometimes, but I tell you the truth. We stumbled around, bumbled around some, but we got it done at the end."

He was proud because ... "We had 5,000 fans cheering for Kansas and 20,000 cheering for the underdog and we won the game. Holy Cross is a team that played a four-point game against Kentucky. They are not Alvamar Tech," Williams said.

"Holy Cross had some tough kids," noted Collison, who had five points and six turnovers. Tim Szatko and Brian Wilson scored 13 apiece for the losing team. "It's the worst game I ever played, but we were able to stare down defeat. We were a step slow all night, but we were still able to win."

Hinrich was "in good spirits" after the game because he was told he had a sprain, not a bone break, and also "we won the game." 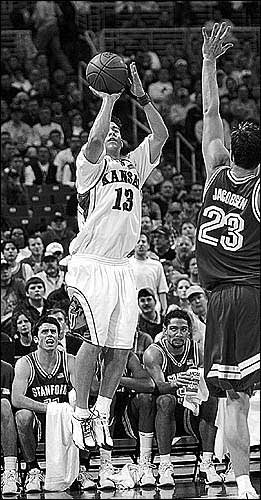 "I'm not feeling sorry for myself at all," noted Hinrich.

Hinrich received nonstop ice and electrical stimulation treatments in a successful attempt to get ready for the Stanford game.

Gooden fed freshman Wayne Simien for a violent slam to open the run, then Gooden hit a layup off a feed from Boschee (13 points). Gooden followed with two free throws at 2:35, following a Holy Cross bucket and KU led 62-57.

Aaron Miles hit a shot after KU committed two turnovers, and Hinrich broke out in a big smile on the bench as KU finally led comfortably, 64-57 at :55. 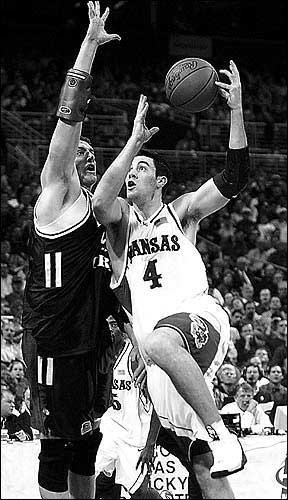 Ku's Nick Collison, right, struggled against Holy Cross with five points and six turnovers, but he rebounded nicely against Stanford.

Kansas was inspired beyond belief for this game, partly because Hinrich was questionable until right before tipoff, making others realize they had to step up, and also because the Jayhawks were stinging from criticism in the press.

Nobody, except Williams it seems, was happy with the victory over Holy Cross.

"Everybody was badmouthing us Kirk's injury there were a lot of things there," Williams said. "I did say, 'Let's shut everybody up. Let's go out and play.'''

Oh, boy, did the Jayhawks play.

Playing without Hinrich to open the contest, KU went on a 15-0 game-opening surge and never looked back. 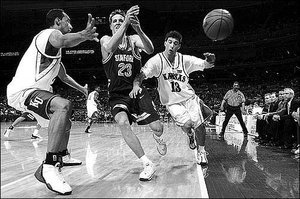 "I am one to not look at the score, to concentrate on each possession," Williams said. "I did not know it was 15-0. I knew we were playing well. I was just ticked off they picked up a loose ball to score their first basket. At the end of the half I looked up at the scoreboard finally and people were probably wondering what the heck I was doing."

He was thinking a lot about Hinrich, who was able to play limited minutes after undergoing continuous treatment for 48 hours.

He was all over the court, hitting the deck for loose balls a whopping eight times. Hinrich made four of five shots the first half and six of nine for the game en route to his 15 points.

Collison bounced back from a tough night against Holy Cross to score 17 points with 13 boards.

"Nick," Gooden said, "was a beast. I told him that. I said, 'You are a beast.' He was beasting everybody, rebounding, blocking shots all over the boards. When Nick is rolling, he's rolling." 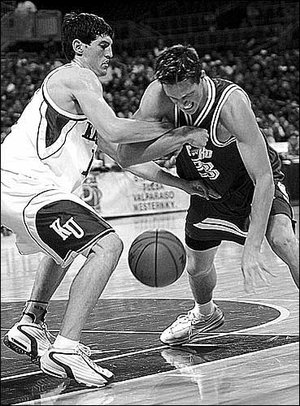 Boschee was the smoothest Jayhawk, shrugging off an ankle injury of his own to score 19 points on 5-of-8 three-point shooting.

Jacobsen, who was guarded by Langford, Hinrich, Boschee and Brett Ballard, finished with 24 points off 8-of-18 shooting.

"I just tried to get up on him defensively," Langford said.

Collison gave up three inches to the 7-foot Borchardt.

"When you give up three or four inches," Collison said, "it makes the game more difficult. You must focus on positioning and bodying up. I felt I had to do a good job of putting the body on him."

Borchardt looked beleaguered the first half in scoring six points on 2-of-5 shooting.

"I think so," Collison reflected, asked if Borchardt was frustrated. "He was not getting as many easy looks. He got some dunks late. We made it hard on him for the most part."

Former KU recruit Josh Childress had eight points on 4-of-11 shooting for the Cardinal (20-10).

Childress missed four three-pointers without a make as Stanford made three of 22 threes to KU's nine of 19.

"We got off to a slow start and it really hurt us," Jacobsen reflected. "We turned the ball over and they'd come down and get a three or a layup. Boschee really came off the screens they set for him. When he hit his first two threes it seemed like the screens were getting even harder. He's one of the best shooters in college basketball and they really played around him.

"After they lost to Oklahoma and almost got beat by Holy Cross I thought, 'Hey we can beat those guys.' They have a great team. I wish them the best. I hope they win the tournament."

KU just might win it all if the Jayhawks play defense as they did against Stanford.

"All five of our guys were out on the floor defending," Williams said. "Keith and Aaron were very active on defense early. They came up with some steals. We were relentless."

"I was pissed off, most at answering stupid questions from the media after the Holy Cross game," Gooden said. "It was the worst day I ever had dealing with the media in my life. To get this win and answer smarter questions is a relief."