"A little of both," Kansas junior guard Kirk Hinrich said after the Jayhawks' 88-81 basketball victory over Iowa State on Wednesday night at Hilton Coliseum. 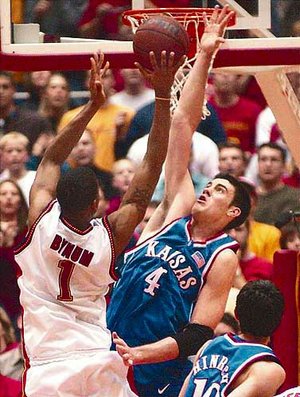 It marked the Sioux City, Iowa, native's first win against Iowa State. He had dropped four straight games to the Cyclones, including two at Hilton Coliseum. He also lost a game at Iowa his freshman year.

"It feels great. The frustration of not being able to beat 'em the last couple of years was there," said Hinrich, who collected 12 points, nine assists and two turnovers in 38 minutes.

"It's a big conference road win and is fun to come back to my home state and win."

"Now they are even madder," Hinrich said with a grin. He had an assist on Jeff Boschee's tie-breaking three-pointer with :36 left and iced two free throws at :20.7 to put away the pesky Cyclones.

"It's really a good win for our team, obviously. For me it's almost a relief," Collison said. "I'm relieved to get them here. It's a tough place to play. It's a big win for us to play well against a tough defense like that.

"They kept coming and coming," Collison said of the Cyclones, who battled back from a game-high deficit of 12 points in the second half. "I knew they would after what happened at Kansas State."

The Cyclones were coming off a blowout loss last Saturday at KSU.

The Jayhawks wanted to win for the Iowans.

"Most definitely to have them come home and finally get bragging rights was a big focus of our team," said freshman forward Wayne Simien, who had six points and two boards in seven foul-plagued minutes. "I seem to have hit somewhat of a freshman brick wall and the coaches are keeping me motivated trying to make sure I fight my way through it."


Cramps in foot: Hinrich went down with 2:24 left, right after Jake Sullivan hit a three to give ISU an 81-79 lead.

"I was cramping. My foot and toes were curled up," Hinrich said of a foot cramp.


Dunk you very much: Drew Gooden had a steal and amazing one-handed dunk in the second half.


Stats, facts: KU is 16-2 to open the season for the first time since 1997-98. KU is 5-0 in the league for the second straight year. KU has won five straight conference road games. Iowa State hit seven of 13 threes for 53.8 percent, the highest percentage allowed by KU this season. KU tied a season-low with five steals. Hinrich grabbed his 300th career rebound. Boschee's 4-of-4 three-point effort marked the most threes without a miss by a KU player since Nov. 26, 1999, when he hit four against Xavier.
Last year revisited: Ex-Jayhawk Eric Chenowith stole the show with his comments after KU's 79-71 loss to Iowa State last February at Hilton Coliseum.

"Sullivan and Power surprised us. To be honest with you they really don't have any business playing Div. I basketball and they're out there killing us," Chenowith said of ISU guards Sullivan and Shane Power, who combined for 40 points.

"Physically look at Sullivan He goes out there and kills us every night. But if I were a coach I'd want them on my team."

Asked to comment again on Chenowith's comment, the 6-foot-1, 190 pound Sullivan said Tuesday: "He was trying to mean it as a compliment I'm sure. It just came out wrong."

Actually Chenowith did mean it as a compliment, but that of course, is old news.