Austin, Texas — All I could see of Big 12 Conference commissioner Kevin Weiberg was the back of his head. Not that it mattered. I knew the commish, sitting in the media row in front of me at the Erwin Center, was smiling.

Take that Atlantic Coast Conference. Stick that one in your craw, Southeastern Conference. 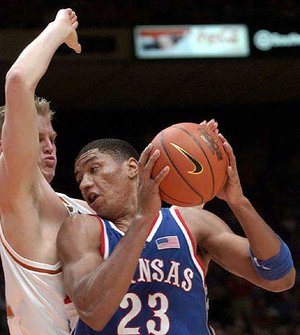 Monday night's Kansas-Texas basketball game on ESPN was what commissioners dream of a close, high-scoring nationally televised game that makes everyone on the East Coast, where all the media supposedly live, stay up way past their bedtimes.

All around the water coolers and coffee break areas from buildings in downtown Manhattan to suburban Los Angeles, people are buzzing: "Did you see that Kansas-Texas game last night? Man, that was something." And so it will go.

They'll talk about how Drew Gooden, seemingly headed for a dreadful game in front of the usual gaggle of pro scouts who gather to watch the Jayhawks, bounced back from a three-foul first half and scored 28 points.

They'll talk about Texas freshman sensation T.J. Ford penetrating and wreaking havoc with the Jayhawks' defense and finishing with 11 assists. They won't talk, however, about the other great freshman point guard in the Big 12 even though the Jayhawks' Aaron Miles had 13 assists.

Oh, maybe they'll talk about how Miles missed a dead-open 15-footer that would have given the Jayhawks the win in regulation, but Miles also won the turnover battle. Ford had five gaffes; Miles only three.

But, heck, if Miles had made that shot, we wouldn't have been able to see five more minutes of one of the showcase college basketball games of the 2001-2002 season.

"That was an unbelievable atmosphere," Texas coach Rick Barnes said. "That was a great crowd and they saw a great college basketball game."

As if we needed anyone to tell us.

"Those two teams just went in the ring and started swinging," Barnes said.

Now that's a more descriptive way of describing KU's 110-103 triumph that left fans all over the country but mostly in Kansas, I suspect limp. How many of you were so keyed up you couldn't fall asleep last night? C'mon, admit it.

Monday's over-the-top performance only strengthened the notion that Texas is the UCLA of the Big 12 Conference. That is to say, you never know how they're going to play, but it's a good bet they'll play the dickens out of the good teams and go into a funk against the bad ones.

Texas, for instance, also took Oklahoma the Sooners have evolved into the second-best team in the Big 12 into overtime before bowing, 85-84.

"We've lost two games here in overtime to two teams that will be No. 1 (NCAA) seeds," Barnes said. "You're always disappointed when you lose, but we're close."

Maybe, maybe not. The 'Horns weren't so close when they bowed at home to Texas A&M (80-74) and they weren't too spiffy in dropping a 71-70 decision at Kansas State. Does that sound like UCLA-itis, or what?

Kansas, meanwhile, remains on target to become a team of destiny the first KU team to go undefeated in conference play since the 1970-71 NCAA Final Four club swept the table in a 14-game season.

On paper, Kansas has only one more hurdle to clear to reach that unprecedented 16-0 goal a trip to Missouri on the last day of the regular season. Until then, though, the Jayhawks have to take care of business against Baylor, Iowa State and Kansas State at home, plus make a journey to Nebraska.

Kansas survived its first overtime test of the season on Monday night. The Jayhawks did it with the aplomb of a team secure in the knowledge of its own ability.

Now maybe all those folks back East will be saying: "Boy, I'd love to see Kansas play Duke." People in the Midwest have been drooling about that prospect for the last couple of months.