The games are still on, but there will be a change of venue. 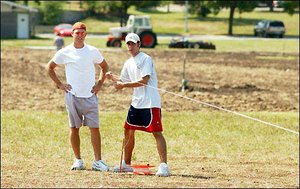 Kansas University program assistants for intramural sports, from left, Kelly Hill, 22, and Derek Gates, 21, work on setting boundaries for some playing fields north of the Shenk Recreational Sports Complex. Shenk fields are being renovated and won't be ready for the start of fall sports.

"The scheduling will be a little crazier than usual," said Julie Brown, a Coffeyville sophomore who coordinates intramurals for Alpha Chi Omega sorority. "I think it'll work out OK, but it's not the most convenient."

KU officials have begun a $137,000 upgrade, funded by student fees, at the intramural fields. When they're done, the fields will have better drainage, sidewalks and bathroom facilities for students with disabilities and grass that's easier to maintain.

The project should be complete by fall 2003. Until then, intramural events will be restricted to part of the north end of the Shenk complex, the field between Robinson Center and the Computer Services Center and on other fields in Lawrence.

"We tried to keep them as close to campus as we could," said Mary Chappell, director of recreation services. "Some students don't have transportation, so that's easier on them."

KU offers flag football and soccer outdoors in the fall, and ultimate Frisbee and softball in the spring. About 10,000 students participate each year.

Chappell said the inconvenience would be worth it.

"Nothing's been done to those fields over a long time," she said. "We just Band-Aided them, and now we're going to make a long-term fix."

Andy Knopp, president of Interfraternity Council and a Manhattan junior, said the next year would pose logistical challenges for intramural planners.

"I'm sure it'll cause some confusion," he said. "I think people will figure it out quickly. The renovations will be worth it. They're much needed. Anybody's who's played out there knows that."