With big-time athletes on both sides of the floor and highlight-worthy plays coming on both ends, the Kansas University men's basketball team closed out the non-conference portion of its 2014-15 schedule with a 76-61 victory over UNLV at Allen Fieldhouse on Sunday afternoon.

For what seemed like the 100th straight game, sophomore point guard Frank Mason III again proved to be this team's most valuable player, leading the Jayhawks when they needed to be led, scoring when scoring was needed and playing tough from start to finish to pace KU to its 11th victory of the season.

KU, of course, got contributions from others — most notably Wayne Selden Jr.’s hot shooting from three-point range (4-of-8, 16 points) — but without Mason things may very well have turned out differently in this one.

Perry Ellis (16 points) mixed good moments with bad, Cliff Alexander (10) put together a second consecutive strong second half and Kelly Oubre Jr. (12) added a couple of big-time shots when the Jayhawks needed them.

• The game turned when: KU opened the second half with seven straight points to reclaim the lead and control. After jumping out to a 13-4 lead, the Jayhawks were outplayed for most of the first half and trailed 33-29 at the break. But Ellis, Traylor and Oubre all scored in the opening minutes of the second half and KU looked like the more hungry, more aggressive team again.

• Offensive highlight: It was a pretty simple play but it illustrated perfectly how little details can be a big deal. After a missed jump shot by UNLV on one end, KU pushed the ball up the floor and got Ellis a quick shot from the block on the other. The shot missed but Alexander, who had raced down from the paint on the other end, slipped right past UNLV's Christian Wood, who never saw him coming, and stood no chance of holding him off. After Alexander got position, he ripped the ball out of the air, shoved the thinner Wood aside and then threw down a nasty, one-handed dunk to put Kansas up 19-12. Honorable mention here goes Jamari Traylor for going coast-to-coast for a vicious slam early in the second half, and to UNLV forward Goodluck Okonoboh, who flushed a reverse slam after going under the rim in the first half.

• Defensive highlight: With just under 16 minutes to play in the game, Mason knocked the ball loose from UNLV's Wood and that started a wild series in which bodies were all over the floor and the fans turned more fevered by the second. Traylor, on his back near the UNLV free throw line, wound up with the ball but quickly tried to flip it to a teammate.

• Key stat: Rebounding. No question. UNLV knocked off Arizona in large part because of its work on the glass. But Kansas got the best of the Rebels on the boards in this one, out-rebounding them 45-31, including 16 offensive boards.

• Up next: The Jayhawks will hit the road on Wednesday for their Big 12 Conference opener, 8 p.m. against Baylor in Waco, Texas. The game will be shown on ESPNU.

Darin Bradley in reply to Crimsonorblue22

He could have easily had 20. For as well as we played our guards did a poor job of feeding the post when he had his man sealed... which was often today. Not a Perry apologist but he's much better than what many fans give him credit for :)

Crimsonorblue22 in reply to Darin Bradley

He's getting better! He's not backing down after getting blocked

I still think BG and Svi get in there. Wondering about Lucas? Different team, more of a chance?

And for the Ellis haters. He's one rebound from a double double and shot over 50% from the field. Not sexy, just productive. We need him!

we found out today that the rotation has been cut down and it appears that SVI did not make the cut.

IMO this game has a A LOT to do with our rotation and letting guys get into a rhythm before getting yanked. Some good things manifest today. Rock Chalk!!

Crimsonorblue22 in reply to Micky Baker

.thanks kusports.com for this site. we love you!!

We can't get much higher in the RPI than we are unless Kentucky loses two or three.

Out rebounded them by 14 wow wow

Mason is becoming quite reliable.

We are figuring out how to score against length!

great game, especially in the 2nd half. That is how this team needs to play. Together and aggressive. I'm out until next time! Have a great one all!

Crimsonorblue22 in reply to Brad Swisher

How did they miss that?

Much better energy, hustle, winning plays from KU in the 2nd half. Had to play that way to put away this talented, young UNLV team.

Great Game, outscored them by 17 since the half wow

And just missed that traveling call.

Crimsonorblue22 in reply to Kristen Downing

Whatever Self said at the half got everyone going

How was that not goaltending? Are these refs paying attention???

Mason has 6 assists now. Not his career high, but if he can get be consistent with 6 plus assists per game, it would help this team a lot.

Ryan_32 in reply to Micky Baker

Definitely don't disagree... We need Perry. That being said, it seems like he's getting more and more inconsistent. I think he was actually playing better ball last year. Probably because he had a real big to take the pressure off though.

I wont' regret watching this game, with us winning or losing. It's been an amazing effort by KU. It's very very entertaining, and the best performance that this team has had this season.

No way do I want to see PE coming off the bench.

Darin Bradley in reply to Crimsonorblue22

I do but he's human. Needs to play to our strengths and not just philosophy. See the release of KO.

Micky Baker in reply to Ryan_32

Might be a good idea to take some of the pressure off Ellis but he still needs to at least 25 minutes.

At this point I think Cliff does not play well until the second half.

Tyson Ailshie in reply to Ryan_32

I think that's a great idea!

This is time to extend the lead up to 18 or 20 and make them wave the white flag.

Hate to say it to soon, but I was the only one to say WIN! Butterflies and rainbows

KO and Perry with chances for double double Benton?

With how the team is playing, i really think we need to play our next game with Jamari/Cliff starting at the 4/5, and Ellis on the bench. Maybe Perry will get his stuff together if he starts coming off the bench.

5 game balls, Keegan Ranking so far, Mason 1st the other 4 tied for #2

Crimsonorblue22 in reply to Darin Bradley

CLOSE IT OUT. DRIVE THE DAGGAR DEEP BOYS.

Bryce Landon in reply to Crimsonorblue22

Or as Mitch Holthus would say, "BRING THE HAMMER DOWN!"

Cliff wants to start. And he should. Looks to the bench with each finish!

Need to defend. No second shots!

I would like to believe it is...but not this year.

Love seeing Selden step it up like this along with Mari, Cliff and Mason

Baylor gives up that last shot by Alexander all day. Will need to hit those Wednesday.

Will an 11-point lead be safe against these guys in the final 4:52?

Cliff has injected this team with physical play! Love it!

Selden's 4th 3-pointer gives him 14 points. He is fired up now and Kansas lead is back to double digits after Alexander scores.

SELDEN OVER THE ZONE!

Crimsonorblue22 in reply to Benton Smith

He did that by himself!

What is this YMCA crap?

Okonoboh got hit hard by Alexander going up for a jam. He subs out after crashing to the floor. Kendrick will shoot the FTs.

what is this Mickey Mouse officiating?

A 9-point lead wasn't safe against these guys, and apparently a 10-point lead isn't safe either.

what the heck is that paper?

Traylor is tired. Just got beat to two loose balls.

Rebels really needed that 3-pointer from Doolin. Brings it back to single digits.

He has brought the energy that Self was looking for./ Congr ats Mari

We need some stops now

If Wood stays to put on lbs, with who UNLV has coming in they will be a top 10 team next year. They are going to be tough to beat.

That's what I was trying to say. Sorry, came out wrong. Young man is playing his tail off! 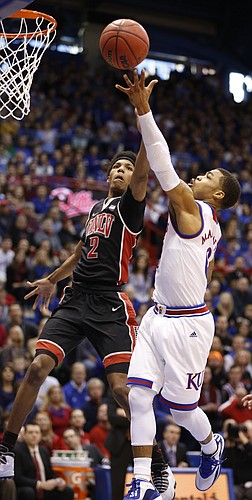 Kansas guard Frank Mason III (0) gets to the bucket against UNLV guard Patrick McCaw (2) during the first half against UNLV on Sunday, Jan. 4, 2015 at Allen Fieldhouse. by Nick Krug

Cliff straight body checked the guy for that hard foul. Put him into the wall pads of the goal like a hockey player into glass.

Jamari has made a lot of positive plays in this game. 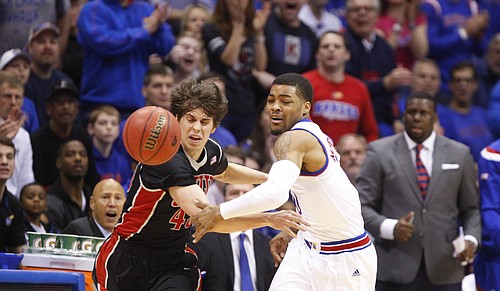 Kansas guard Frank Mason III (0) strips the ball from UNLV guard Cody Doolin (45) during the first half on Sunday, Jan. 4, 2015 at Allen Fieldhouse. by Nick Krug

boy, for all the negative plays Jamari has made, he makes 2 positive plays

Hopefully. Ill be more inclined to agree if we can string 2 or 3 games like this together. These kinds of games bring maturation.