Behind 15 points on 5-of-5 shooting from freshman forward Perry Ellis, the Kansas University men’s basketball team knocked off Emporia State, 88-54, in its first exhibition game of the 2012-13 season.

"He did really well," KU coach Bill Self said. "He just naturally gets the ball in the basket."

The Jayhawks were sluggish in the game’s early minutes, falling behind 10-4 and, later, 14-12 as deep as eight minutes into the first half. But KU’s size, speed and deep bench sparked a 30-7 run to close the half and, by the break, the Jayhawks had doubled up the Hornets and were well on their way to the run-away victory.

Sophomore Naadir Tharpe was a surprise starter for the Jayhawks, taking the place of Elijah Johnson, who did not start because he was "significantly late to a class" on Tuesday, according to Self. Tharpe scored all eight of his points in the first half, but Johnson eventually got into the act, as well, finishing with 12 points and five assists on 4-of-11 shooting, including 2-of-8 shooting from three-point land.

Several Jayhawks made their unofficial Allen Fieldhouse debuts in this one: Ben McLemore (11 points and 6 rebounds in 26 minutes) and Jamari Traylor (6-4-14), two players who spent the 2011-12 season with the team as partial-qualifiers but were not eligible to play, looked strong, and Landen Lucas added six points and nine rebounds in 12 minutes.

"I thought we did some good things," Self said. "We tried hard and looked pretty athletic."

Here’s a quick look back at some of the action.

• The game turned when: Kansas ripped off a 20-1 run, which included a 12-0 spurt, that turned a 14-12 lead for Emporia State into a 32-15 lead for the Jayhawks. The run featured back-to-back three-pointers from surprise starter Naadir Tharpe as well as back-to-back treys from senior Elijah Johnson and freshman Ben McLemore. KU led 42-21 at halftime and cruised home from there.

• Offensive highlight: With 10:42 to play in the game, senior guard Elijah Johnson elevated for a three-pointer from the top of the key that missed to the left. The bounce, however, hung in front of the rim, allowing freshman Ben McLemore to fly down the lane for the follow-dunk that delighted the Fieldhouse crowd.

• Defensive highlight: With 15:36 to play in the second half, and following a timeout, freshman forward Jamari Traylor jumped into a passing lane and picked up one of his four steals. He followed it up with a two-handed, high-flying rim-rattler that won’t do anything to quiet the comparisons to Thomas Robinson.

• Key stat: As expected, the Jayhawks outrebounded the Hornets, 43-23, in this one, including a 13-7 advantage on the offensive glass.

• Up next: The Jayhawks will close out their exhibition schedule Monday, Nov. 5, when they take on Washburn at 7 p.m. at Allen Fieldhouse.

Awesome shots as always, Nick Krug! (Someone tell Nick for me.)

...not sure I'm following... I was saying BMac won't be staying until his senior year. He'll be gone early. Just a matter of what year.

I think Rio beats out Tharpe on the depth chart, his D is incredible thus far

Jaycon11 in reply to Adam Evans

yes. ass is getting kicked.

We have to pray it doesn't or top talent will stop coming our way.

Just joined in. Anyone have a basic box update?

Lajayhawk in reply to Duane Rice

Ha. Obviously. It was more a comment about where the draft boards have him right now. Just curious if after his first game if he looks like he'll be there at the end of the season.

Lucas really doesn't want to post up and shoot.

Lucas just isn't going to see any time outside of the exhibitions...

Lajayhawk in reply to Jaybate

Clearly. Basing it off of last year, defense is definitely the way to beat out Tharpe.......

Duane Rice in reply to Lajayhawk

Theend in reply to Melrank

The live link is only showing half the screen...killing me!

Jaybate in reply to Lajayhawk

When he is a senior.

Melrank in reply to Theend

They are living proof we can be a good football school too.

Lajayhawk in reply to Jesse Newell

Brian Powell in reply to Trojanhawk

So, anyone who's seen the whole game want to comment on whether BMac is looking like a lottery pick already?

Rio needs to remember this:

Only pass to someone wide open.

If he does these things, then he is our backup 1.

i'd say. if he gazed over the guard landscape he saw that it might tip the scales towards him v tharpe in playing time this yr.

Trojanhawk in reply to Brian Powell

Please, no posting from the bathroom.

Theend in reply to Melrank

Jesse Newell in reply to Lajayhawk

ESU to shoot two after the break. Foul on Johnson.

To me, Rio looks like Jason Terry when he played at Zona.

Smart kid. Good way to do it under a Self system.

Melrank in reply to Theend

Dangerous question, but if K-State can run the table will you pull for them in the NC game?

Are the Naismith rules viewable yet?

adams is trying to gain playing time on the strength of his defense...

The incredible thing about Rio is that he's even playing a little help.

I don't miss Missouri......but we really do need someone else to dislike intensely. K-State? Eh....somewhat.....

Excuse me, make that back up 1.

Ellis looks smooth on the foul line. LAJayhawk is a fan of that.

Jaybate in reply to Chris Shaw

Self knows the backup two has to play some defense and Naadir is not doing it.

TRel bailed out right there.

Jaybate in reply to Theend

No, I love how they suboptimized their football revenues.

I love this team... I see great things coming

Jaycon11 in reply to Chris Shaw

only because it is an exhibition game!

Coldcoffee in reply to Brian Powell

Self didn't yank Rio after that pass! That is promising! :)

Lajayhawk in reply to Jesse Newell

Yeah.... Little overboard on that one...

Jaybate in reply to Jaybate

One guy fighting through a pick I mean. :-)

anyone else like watching Rio defend on-the-ball? Reminds me of EJ earning some playing time his first year or two...

Is Rio's wingspan really exceptional? Looks like Tyshawn out there.

Adams fought through a pick! This ranks as good defense tonight.

Theend in reply to Coldcoffee

Not the best way for Adams to get more playing time. Simple plays, kid. 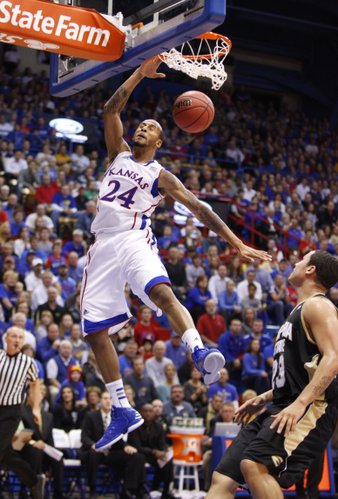 Kansas guard Travis Releford throws down a dunk before Emporia State guard Tre Boutilier during the first half, Tuesday, Oct. 30, 2012 at Allen Fieldhouse. by Nick Krug

Coldcoffee in reply to Theend

They show the replay of EJ, but not Mclemore?

Realize that this is just preseason, but that dunk should make an ESPN highlight tonight

Is it just me.....or does anyone else NOT miss Missouri? 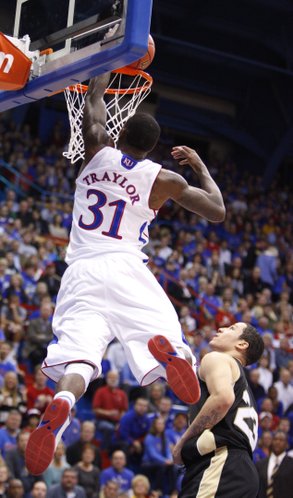 Lajayhawk in reply to Jaybate

football jesus turned me into a football atheist. 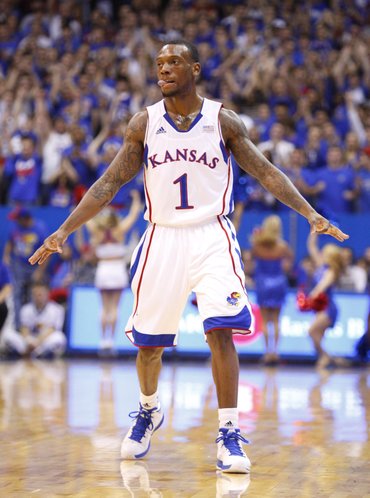 Kansas guard Naadir Tharpe signals "three" after hitting a three-pointer against Emporia State during the first half, Tuesday, Oct. 30, 2012 at Allen Fieldhouse. by Nick Krug

Melrank in reply to Jaybate

McLemore's dunk gave some pep to Johnson, who used a nice crossover to get to the rim for two and a foul.

Finally, EJ getting a little aggressive on O.

Rcjhgkuks in reply to Eric TheCapn

Thanks! I was actually hoping it'd be a different one cause I'm in class and every freakin site to watch has been blocked on our server. Thank you though.

Was gonna ask if you felt like punching a football Jesus, but I didn't want to be a dick :)

McLemore with a stickback dunk. Some NBA athleticism there.

Very good to hear. I've was hearing the early knock on him was he was too tentative. Think he's gonna get over that quickly. We need him to.

I remember last year after one of the exhibition games someone proclaimed Tharpe the greatest guard at KU since JoJo White!

I like the football team but they don't know how to win. So they lose games they should win.

Eric TheCapn in reply to Rcjhgkuks

Kansas guard Naadir Tharpe signals "three" after hitting a three-pointer against Emporia State during the first half, Tuesday, Oct. 30, 2012 at Allen Fieldhouse. by Nick Krug 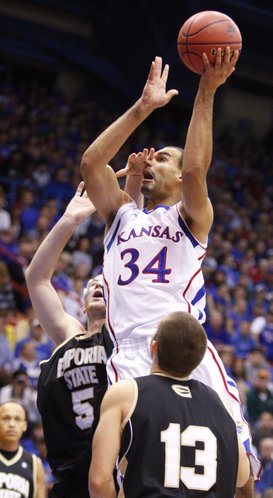 Jaycon11 in reply to Jaybate

perry is going to be a complete package...

I know I'm late but...anybody have a link?

jaycon11.....then you are missing some nice things on the football field...doesnt show in the record but charlie is building something 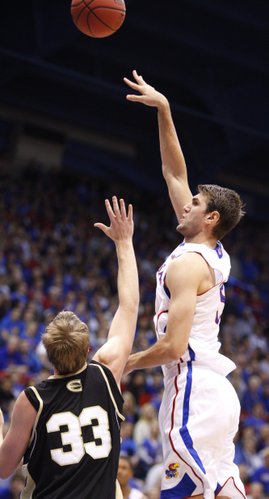 Jaybate in reply to Melrank

Perry is going to be a scoring machine some time.

Rcjhgkuks in reply to Eric TheCapn

um no its not we need to support both!