Kansas' defense came up with a fourth-down stand in the final minute, helping the Jayhawks to a 28-25 victory over No. 15 Georgia Tech on Saturday at Memorial Stadium.

Tech trailed by just three and was driving late, but on fourth and eight from the KU 40, Joshua Nesbitt's pass sailed wide of Stephen Hill.

In his debut, KU freshman running back James Sims had 17 carries for 101 yards and a score. Quarterback Jordan Webb, in his first start, was 18-for-29 for 179 yards with three touchdown and one interception.

It was KU's first victory over a top-20 opponent at Memorial Stadium since 1984.

KU (1-1) will travel to Southern Miss on Friday.

That was an awesome win, but I am sad that the fans rushed the field afterward. We don't do that at KU. We're better than that.

Rock Chalk, Jayhawk! What a win!

I was one of the toughest on the coaches and players this past week. They proved me wrong today!

Jayhotch in reply to Jesse Newell

Exciting game - nerves are shot, but what a result!

By the way, totally kidding. TG did an excellent job turning the team around!

Two kneeldowns, and it's over.

The KU students rush the field to celebrate with the team.

It's a beautiful day in Jayhawk land!!!

Nesbitt had a man open on the sideline, but his throw sails out of bounds. The quarterback drops his head as KU's defense celebrates.

The Jayhawks are going to pull off the major upset.

False start for Georgia Tech. Credit to the KU crowd for getting loud. Now it's fourth and eight, and Tech will still have to go for it.

Great photo (and great to see shots from the game for those of us working near no TV.)

Allen is stuffed on a dive up the middle. Fourth and three for Tech.

Nesbitt fakes a pitch on second down, running for four yards.

Third and two for Tech, with the clocking ticking down to two minutes.

On a deep throw, Chris Harris is called for pass interference. He didn't need to, as Nesbitt's pass was well overthrown. First down for Tech at the KU 42.

Oguntodu with a huge hit on Nesbitt after the QB tried to scramble. Oguntodu is helped to the sideline. Third and one for Tech.

Well, this is where we separate the men from the mice.

Another big mistake for KU, as Prinz Kande levels Jerrard Tarrant before he receives the punt. The penalty moves the ball to the KU 34.

I used this word earlier for different reasons - unexplainable.

gotta go up the gut, not the side

Sims is stopped on a run left, gaining nothing. Tech calls timeout, and the Yellow Jackets will get the ball back following a punt. 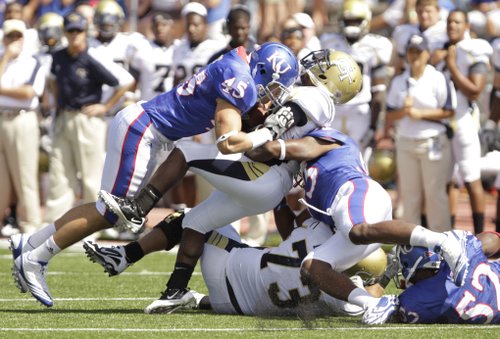 Just before a third and two play at the KU 47, Gill doesn't like what he sees and calls timeout. Another huge play upcoming.

Sims runs for eight, but then is stuffed on the next play. Third and two.

Other than the two run before you catch it plays, Patterson is the stud of the day.

Webb does a great job of hanging in the pocket with the blitz, firing at the last second to Patterson, who dances upfield for 15 yards and a huge first down.

Patterson's exciting in the open field

Sims carry goes for no gain. KU can't get too conservative.

Beshears only returns it to the 18. Georgia Tech's defense sprints onto the field.

Ruh roh...momentum is shifting. C'mon Hawks you can do it. Burn the clock but score this time.

Steven Johnson puts pressure on Nesbitt on third down, but the Tech quarterback fires deep to Stephen Hill, who brings down a 40-yard grab in the back of the end zone. KU's secondary was beaten there. A noisy Memorial Stadium has gone quiet.

The Yellow Jackets go for two, and Hill is left open in the flat, catching the pass to make it a three-point game.

That was a massive throw.

holy s you know the rest

holy s you know the rest

False start for Georgia Tech. KU's defense gets a breather as well.

Blown coverage for KU, and Peeples catches a pass after running uncovered. He goes 46 yards, and Tech is already at midfield.

LOL i was way off that time

What does army say? He made a pretty good call on the play action.

i smell an interception 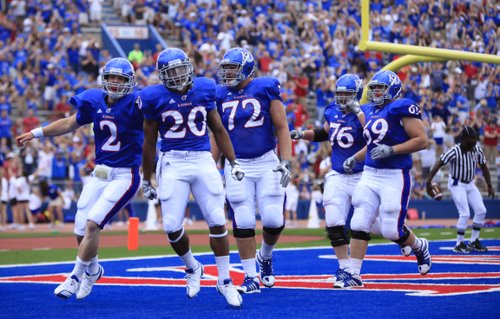 KU can't take advantage of the great field position, going backwards in three plays. Webb's throw on third down was way long, and he was lucky it wasn't intercepted.

Rojas is back in, though, and his punt hits at the two-yard line and bounces backwards. Tech will start the drive at its own four.

Tech's Orwin Smith loses the ball on a pitch, and Drew Dudley recovers for KU at the Tech 34. Big hit by Keeston Terry helped force the fumble.

would someone please tell these announcers it's Keeston Terry!

I think they surprised one GT player who wasn't paying attention on the QB sneak but doggone if we didn't get it back! Thanks, Roy, for giving me a new word in my dictionary.

For the record, that was the right call, in my opinion.

should have gave it to sims

KU goes for it on fourth and inches, but Webb is held short of the first down on a QB sneak.

Tech will take over at its own 44.

I think we have a play maker!

I THINK WE HAVE A RUNNING BACK!!!

Sims jukes a defender in the backfield, then runs forward for seven yards. Not sure another KU running back makes that move.

Webb showing his youth but you gotta love the potential!!!

Tech goes for it on fourth down, but Nesbitt's pass is short of its target and hits the turf in front of the intended receiver.

KU's defense holds, and the Jayhawks will take over at their own 46.

On third and five, Isiah Barfield goes low to take down Nesbitt for no gain. Barfield stays down, and after being attended to by trainers, he walks off the field under his own power.

hunger!! nice to see!! i like what I'm seeing today..... the D is rocking, is that Todd Reesing out there?

Kansas freshman running back James Sims takes off on a run against the Georgia Tech defense during the first quarter, Saturday, Sept. 11, 2010 at Kivisto Field. by Nick Krug

You state it is a different team, I agree. I still doubt the other one

Long pass from Nesbitt sails wide of his target. He's just 2 of 8 for 25 yards passing today.

I am stunned (although gleefully). I guess we the season just started a week earlyfor us.

Georgia Tech returns the kickoff to its own 49. The penalty gives the Jackets great field position.

i never said one bad thing after there loss

what a different team out there..... all you doubters can eat crow

Did anyone notice how gill handled the flag after the TD with patterson? A lot different than mangino with with Talib.

The excessive celebration penalty was a bad call.

What a play from Patterson.

On a bubble screen, he showed some Dante Hall-like footwork, dancing around defenders and stepping through a tackle before doing a leaping somersault into the end zone for a 32-yard touchdown.

Patterson will get an excessive celebration penalty, but still, what a run after the catch.

KU is up two scores on a team that doesn't get quick scores easily.

as long as it doesn't cost us

After a play like that (and last week) I'm ok with the flag.

On third and long, a catch from Wilson comes up well short of the first down, but Tech roughs up Webb. Another free first down for KU, which is up to the Tech 32.

The football gods seem to be smiling on us.

Webb is sacked from his blind side on first down. He doesn't seem to be able to sense when he's being pressured.

Still, KU is driving and has a lead over a top-15 opponent heading into the fourth quarter.

Once again, KU uses the hurry-up offense effectively, as Sims leaps over a defender before running 26 yards down the left sideline.