Thomas Robinson added 12 points and 10 rebounds, while Travis Releford (5-for-6 shooting) and Marcus Morris (4-for-8 shooting) also had 12 points apiece.

For the second straight game, KU was impressive from the free-throw line, making 35 of its 40 shots there (87.5 percent).

KU will open the regular season on Friday with a home game against Longwood.

KU finishes off a 31-point victory.

Woolridge called for a charge on a drive. Just 21.2 seconds left.

Juenemann bailed out by a foul. He'll shoot free throws.

Niko Roberts with a drive between the trees, and he's fouled.

Robinson makes one of two free throws. KU now 31 of 36 from the line.

Boswell beats Reed on a backcut for a layup. That's not the first time tonight Reed has been beaten on a cut to the rim.

Jordan Juenemann in for KU.

Bulltown03 in reply to Nick Nelson

very solid games by those players

Foul ESU. Timeout on the floor. Half the crowd is leaving.

Markieff Morris with a layup inside. ESU's Michael Tyler drives by KU defenders, though, putting in a layup.

Nick Nelson in reply to Bulltown03

Foul on Little. That's his fifth. He finishes with seven points.

and there goes little

Jesse Newell in reply to Bulltown03

Johnson makes both free throws. The Jayhawks continue to impress from the free-throw line.

does markieff and tom rob have all of ours?

Markieff throws a lob to Johnson, who is undercut by a Hornet for a foul.

any one have the team comparison for 3 pointers?

Robinson guns a pass into Markieff, who is fouled in the lane. Nice entry feed from the big man. 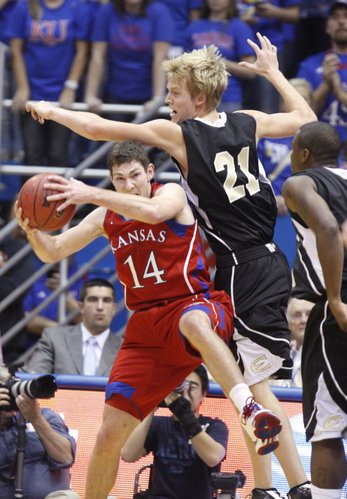 Releford with 12 points on perfect 5-for-5 shooting.

Offensive foul on ESU's Jordan Stout. Media timeout. We've had a lot of stoppages stacked up in a row here.

Thanks Jesse! You are the MAN for keeping us updated like this.

Self is trying to get Robinson some reps on offense and he is making a case for himself in just about every other area of the game.

Robinson works hard for position, and Taylor rewards him with a nice lob pass inside. Robinson turns to the rim and puts in the layup.

tom rob all over the offensive glass

Robinson misses two short shots inside, picking up an offensive rebound in the process. The effort is there, but right now, the execution on the shot isn't.

I'd love a running score count when guys score, so we can update our mental box score! How many boards/points is McMorris up to now?

Marcus Morris goes high for a rebound, and he comes down hard. Play is stopped, but Marcus walks to the bench under his own power. I think he took a shot to the groin area, if you know what I'm saying.

Marcus Morris seals his man inside, and he puts in a layup.

Little with a hustle steal, and before going out of bounds, he tosses to Releford for a layup.

Despite the poor passing the offense actually looks quite a bit ahead of the defense for this early in the season.

Taylor throws it away, and a frustrated Self calls timeout.

KU has four players with 10 points and two more with eight.

Little beat on a full-court baseball pass. Boo Jackson to shoot two after Little fouls him.

Little with two more free throws. He's 5-for-5 from the line.

Runningbeakers84 in reply to Jesse Newell

I understood what you meant. Not that difficult.

No just that their reserve players are scrubs. I mean, it's true, but don't you get paid not to talk like me?

Jesse Newell in reply to Soobawls

I meant ESU's reserve players are on the court. Not saying ESU is a scrub team.

We'll see if Moe checks his regulars back in. If not, expect more steals from KU.

"The Hornets have a scrub team out there" is that up to J-school standards?

Little with a steal, and ESU fouls him. The Hornets have a scrub team out there right now.

another steal from little

Little's free throw rolls over the front rim and in.

Another steal for Marcus, and he flips to Johnson, who spins before feeding Little for a layup and foul.

count the basket for little

Marcus Morris with a steal, and he throws over his head to Morningstar for a layup.

That's what I thought as well but apparently the mob says otherwise.

Reed with two free throws. ESU already up to eight team fouls this half.

Reed is beat defensively on a cut to the rim, and Burnette puts in a layup.

Another transition opportunity for KU, as Marcus Morris is fouled on his way to the rim. 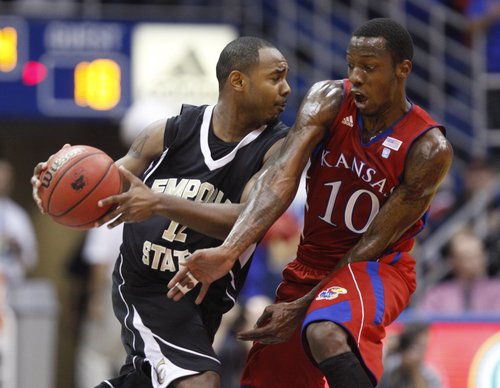 morningstar needs the sleeves back

Robinson kicks out to Morningstar, who misses an open three. 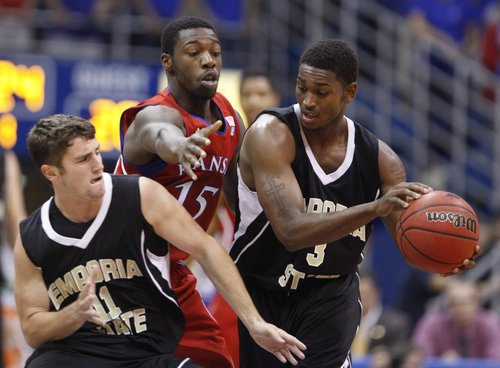 Kansas guard Elijah Johnson defends as Emporia State guard Jarvis Nichols (3) tries to hand off to Taylor Euler (11) during the first half, Tuesday, Nov. 9, 2010 at Allen Fieldhouse. by Nick Krug 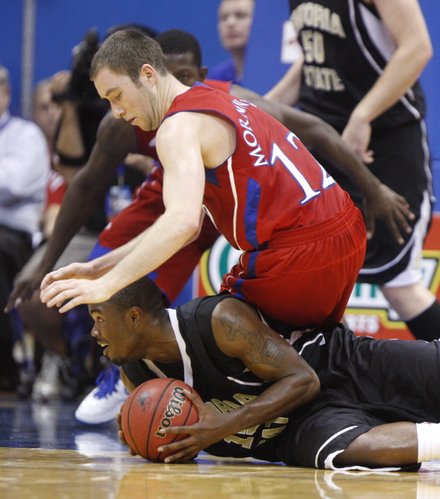 Kansas guard Brady Morningstar looks to wrestle for the ball with Emporia State guard Xavier Burnett during the first half, Tuesday, Nov. 9, 2010 at Allen Fieldhouse. by Nick Krug

Marcus with a quick spin move on the baseline, and he draws a foul. KU seems to be getting more post touches in the second half. 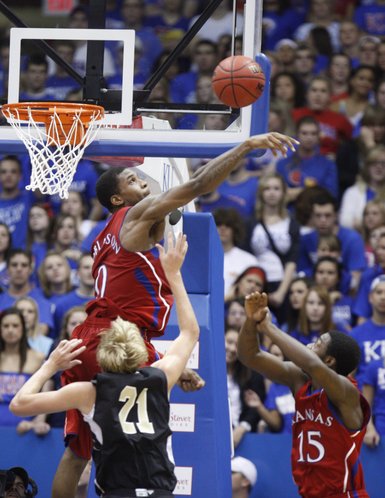 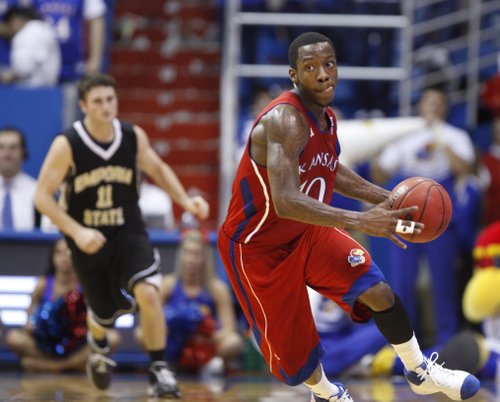 Kansas guard Tyshawn Taylor turns up the court after picking up a loose ball against Emporia State during the first half, Tuesday, Nov. 9, 2010 at Allen Fieldhouse. by Nick Krug 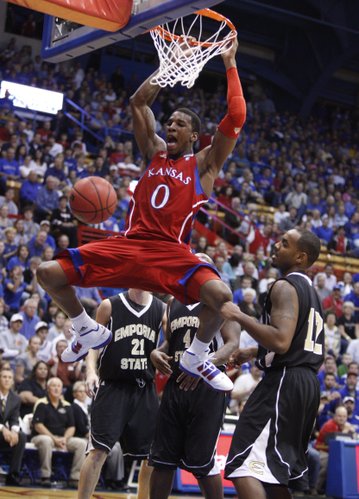 Your bad any photos. 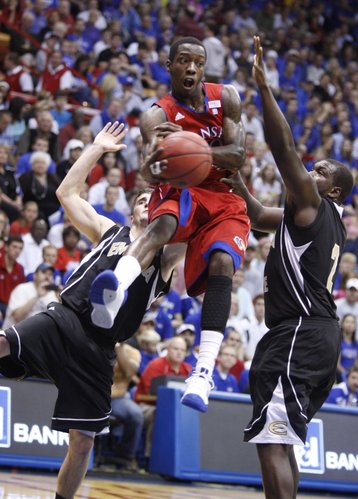 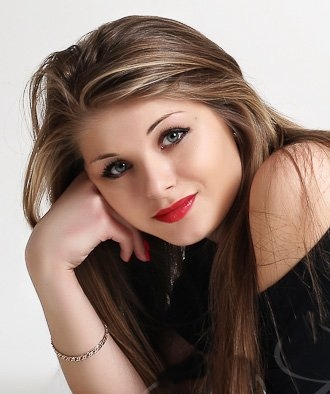 Good half-court defense for KU, forcing a tough ESU shot. It leads to transition, as Taylor is fouled on his way to the rim.

tom rob is a beast

Releford confidently steps into a three, and he knocks it in from the top. That draws three claps from Self. 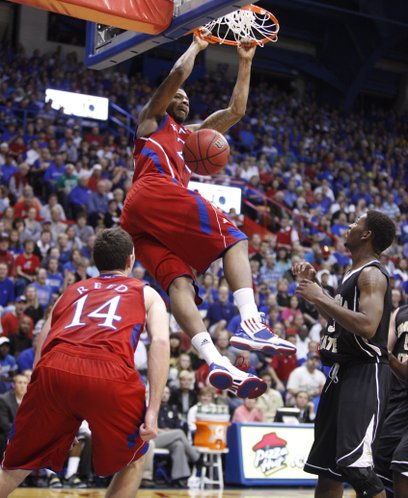 Kansas forward Marcus Morris throws down a dunk against Emporia State during the first half, Tuesday, Nov. 9, 2010 at Allen Fieldhouse. At left is KU guard Tyrel Reed and at right is ESU guard Jarvis Nichols. by Nick Krug

T Rob is having a pretty good game

Robinson battles underneath for an offensive rebound, and he's fouled going up for a shot. Good relentlessness by the sophomore.

Boo Jackson with a layup underneath. Self summons Morningstar off the bench to get Little.

Robinson with a block, and it leads to easy points for KU, as Releford finishes with a jam on the other end.

Robinson rattles in an 18-footer from the top of the key.

Boo Jackson left alone, and he knocks in a three. Blown defensive assignment there for KU.

Markieff misses his first shot, a fallaway in the lane.