Quick recap: No. 6 Kansas surrenders 102 points in loss to No. 1 Gonzaga in season opener

The long-awaited return of college basketball certainly delivered, even if it meant a 102-90 loss for the Kansas men’s basketball team. 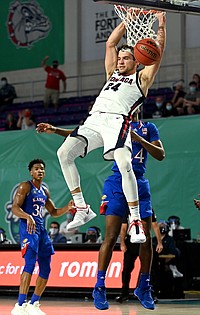 Redshirt freshman Jalen Wilson won the race to be the Jayhawks’ fifth starter during KU’s 102-90 loss to No. 1 Gonzaga on Thursday at Suncoast Credit Union Arena in Fort Myers, Fla. By Matt Tait

If someone had told me a year ago that I would be watching No. 6 Kansas play top-ranked Gonzaga five miles from my Fort Myers, Fla., home, I would have pinched myself. The dream would have been too good to be true. By David Dorsey, guest columnist

No. 1 Gonzaga sprints by Kansas, 102-90, at season-opening Fort Myers Tip-Off

Different season, different team, different result for No. 6 Kansas, which had its 16-game winning streak snapped in a 102-90 loss to No. 1 Gonzaga on Thursday at Suncoast Credit Union Arena in Fort Myers, Fla. By Matt Tait

With a national spotlight on Thanksgiving afternoon against top-ranked Gonzaga as the backdrop for McCormack’s season debut in that role, the 6-foot-10 junior struggled to do what KU’s defense needs most out of him, and the Zags found their way to the paint over and over in a 102-90 victory at the Fort Myers Tip-Off.