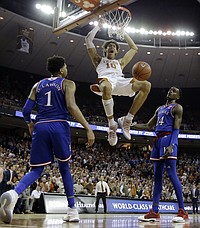 Texas head coach Shaka Smart reacts to a play during the second half on the ...

Austin, Texas — Losing at Kentucky is one thing. Losing at Iowa State is another. But now this? Behind a lackluster first half and another off-key offensive night in the city dubbed the Live Music Capital of the World, the 11th-ranked Kansas men’s basketball team dropped to 1-5 in true road games this season with a 73-63 loss to Texas on Tuesday night at Frank Erwin Center. By Matt Tait

Austin, Texas — Call it a lack of leadership, the absence of a coldblooded mindset, relative inexperience or all of the above. But this Kansas basketball team doesn’t yet know how to win on the road. The evidence against the Jayhawks turning this season into one that will be deemed as acceptable or memorable in basketball-crazed Lawrence mounted Tuesday night at Frank Erwin Center, where KU trailed for more than 37 minutes of a 73-63 loss at Texas.

Dotson: Jayhawks need to play with ‘pride’ on road