Quick recap: No. 5 Kansas tops No. 23 Oklahoma to win another Big 12 opener

Death, taxes, and Kansas winning the Big 12 opener. KU has rattled off 14 consecutive conference titles, which is an NCAA Division 1 record. But the program’s most remarkable streak may just be its mind-boggling run of winning the first game of Big 12 play.

With Wednesday’s 70-63 victory at Allen Fieldhouse, the games are underway and the race is on, as No. 5 Kansas — and three other Big 12 teams that won on Wednesday night — took an early lead in the chase for the 2019 Big 12 Conference crown. While 17 games and a ton of grinding remains in the weeks ahead, KU coach Bill Self recently was asked what he thought it would take to win the Big 12 this season. 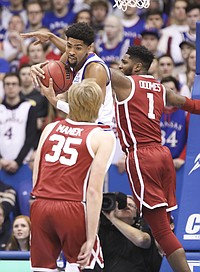 View a gallery of images from Wednesday night's game between the Jayhawks and Sooners at ...

Say this for the fifth-ranked Kansas men’s basketball team: It sure does know how to make things hard on itself. The latest example of this reality, call it unnecessary complexity, came Wednesday night at Allen Fieldhouse, where the Jayhawks struggled through sleepy starts to both halves, but still held off No. 23 Oklahoma, 70-63, in the Big 12 opener for both teams.