No. 12 Kansas never had a chance in its biggest game of the season. The Jayhawks trailed for the duration of their 91-62 loss to No. 14 Texas Tech Saturday night in United Supermarkets Arena. The Red Raiders (22-5, 10-4) set the tone, taking a double-digit lead within five minutes into the game. KU (20-7, 9-5) never recovered from the early punch by Texas Tech, which snapped a three-game win streak.

K.J. Lawson: 'Sometimes you get a flat tire' 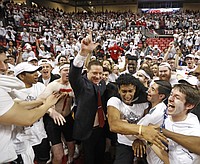 Lubbock, Texas — Three weeks ago, after his team’s 16-point loss to Kansas in Lawrence, Texas Tech coach Chris Beard called Allen Fieldhouse and the KU environment, “a hornet’s nest,” and said he knew his team was walking into a tough situation that day. By Matt Tait

The two teams currently tied for second place in the Big 12 standings battle it out in Lubbock, Texas.