Oklahoma State rolls past No. 6 Kansas in regular-season finale

Oklahoma State became the first team to sweep Bill Self in his 15 seasons at Kansas, as the Cowboys closed the regular season with an 82-64 beating of the No. 6 Jayhawks at Gallagher Iba Arena. Only one KU player, senior point guard Devonte’ Graham, scored in double figures. Graham’s 4-for-14 shooting gave him a team-high 15 points in the final Big 12 road game of his four-year career. By Benton Smith

View a gallery of images from Saturday's game between the Jayhawks and Cowboys at Gallagher-Iba ...

Bill Self laments Jayhawks' lack of competitiveness after largest loss of season, at Oklahoma State

Kansas basketball coach Bill Self laments' the Jayhawks' competitiveness following an 82-64 loss at Oklahoma State in the regular-season finale.

Sometimes when Kansas sophomore Udoka Azubuike steps onto the basketball court, his 7-foot, 280-pound frame is too immense for opponents to handle. The mere idea of defending or trying to score over the Jayhawks’ center becomes intimidating. Oklahoma State’s big men suffered no such trepidation Saturday at Gallagher-Iba Arena. By Benton Smith 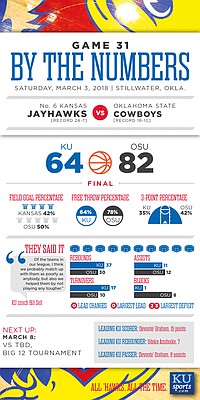 Bill Self: Cowboys 'a lot better' than KU, worthy of tourney invite

About a half an hour after his team's 82-64 loss to Oklahoma State mercifully came to an end, Kansas basketball coach Bill Self was asked a simple question fairly early in his postgame meeting with the media. In all likelihood, Self preferred fielding this question as a bit of a break from all of the inquiries about what went wrong with his team and what comes next. The question: Do you think Oklahoma State is worthy of a spot in the upcoming NCAA Tournament? By Matt Tait