No one in Clemson basketball history ever scored more points in an NCAA Tournament game than senior guard Gabe DeVoe did Friday night in the Sweet 16. The Kansas players who couldn’t stop the 6-foot-4 DeVoe were just glad his teammates weren’t as successful. By Benton Smith

As difficult as it was for the pro-Kansas crowd to watch a 20-point lead shrink to one-fifth that size, the final 10 minutes of KU’s 80-76 survive-and-advance victory Friday night against Clemson served a purpose. “Certainly nobody can say that we’ve played our best game yet,” Kansas coach Bill Self said in the hall outside of his team’s cramped locker room inside CenturyLink Center. “Hopefully, that will come Sunday.” By Tom Keegan

After delivering a 1-of-7 shooting performance in last weekend's second-round victory over Seton Hall, the expectation was that Kansas senior Devonte' Graham would come out in Friday's Sweet 16 game against Clemson ready to bounce back big time. By Matt Tait

After rolling to a 14th straight Big 12 regular season title a little more than a month ago, the Kansas men's basketball team now sits one win away from adding an ACC title to its 2017-18 haul. Oh, and a trip to the Final Four. By Matt Tait 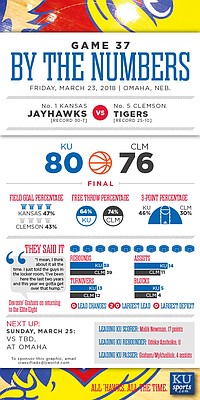 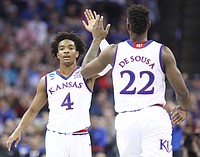 View a gallery of images from Friday night's Sweet 16 game between the Kansas Jayhawks ...

The top seed in the NCAA Tournament’s Midwest region, Kansas (29-7) already has defeated six of the other teams to reach the Sweet 16 this March. The Jayhawks try to take down a seventh, and secure a third consecutive berth in the Elite Eight when they face No. 5 seed Clemson (25-9) at CenturyLink Center.