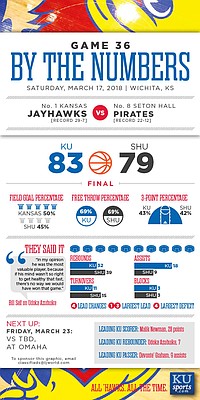 Even on a night when Kansas didn’t get its typical production out of star Devonte’ Graham, the senior’s teammates more than made up for it against Seton Hall at Intrust Bank Arena. KU’s other three backcourt starters all produced double-digit points and gigantic sixth man Udoka Azubuike looked revived and ready inside as the Jayhawks advanced to the Sweet 16 with a 83-79 win over Seton Hall Saturday in the NCAA Tournament’s second round. By Benton Smith

It was the simplest of plays — one Kansas has run a thousand times this season. And it almost was responsible for the end of the Jayhawks' season. By Matt Tait

Kansas basketball coach Bill Self had finished talking to his team during a timeout midway through the first half of Saturday night’s second-round game against Seton Hall, but he had one more thing to say to sophomore Malik Newman. By Tom Keegan

View a gallery of images from Saturday's second-round game between the Jayhawks and the Pirates ...

The idea coming into KU's second-round NCAA Tournament game at Intrust Bank Arena was for the top-seeded Jayhawks to keep injured center Udoka Azubuike on some sort of minutes restriction, somewhere in the 15- to 20-minute range. By Matt Tait

NCAA Tournament blog from Wichita: No. 1 Kansas vs. No. 8 Seton Hall

A spot in the Sweet 16 awaits the winner of Saturday night’s game between top-seeded Kansas (28-7) and No. 8 Seton Hall (22-11) at Wichita’s Intrust Bank Arena. The Jayhawks and Pirates haven’t squared off since an encounter at the Maui Invitational, in 2001. KU prevailed on that occasion and is 1-1 all-time versus Seton Hall.

NCAA Tournament 2nd Round: No. 1 Kansas vs. No. 8 Seton Hall