Staring down the barrel of another two-game losing streak and a second early loss in Big 12 play, the Jayhawks responded in hostile territory. By Scott Chasen

When your team boasts just one regular season victory in the history of its program over the big, bad wolf from the conference, you tend to be more scared than excited about the traditional powerhouse coming to town.By Matt Tait

Mitch Lightfoot doesn’t always look as if he belongs playing minutes that matter for perennial national college basketball powerhouse Kansas. Against bigger bodies he sometimes looks too small, too weak. Too often he has the look of a playing-out-of-position backup center. And then there was Saturday night in Schollmaier Arena. By Tom Keegan 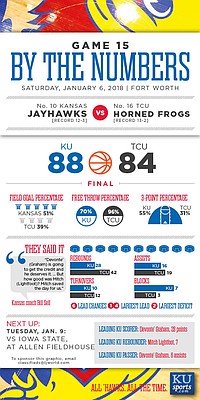 View a gallery of images from Saturday's game between the Jayhawks and Horned Frogs in ...

Kansas coach Bill Self has been begging his team to be tougher and more competitive all season. Saturday night at TCU’s Schollmaier Arena, Self got his wish. And right away. By Matt Tait

Playing its second game against a ranked Big 12 foe this week, No. 10 Kansas looks to regroup from a home loss in a hostile environment, on the road at No. 16 TCU.