Bill Self: Azubuike staying in was 'obviously the wrong thing' for KU vs. Oklahoma

A season-long concern that had not yet fully hurt the Kansas basketball team did the Jayhawks in on Tuesday night, when 12th-ranked Oklahoma used an intentional-foul strategy on KU big man Udoka Azubuike during the game's final four minutes to knock off No. 5 Kansas, 85-80, at Lloyd Noble Center. By Matt Tait 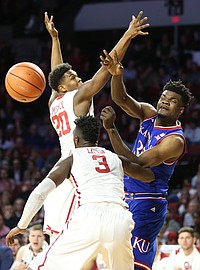 View a gallery of images from Tuesday night's game between the Jayhawks and Sooners in ... 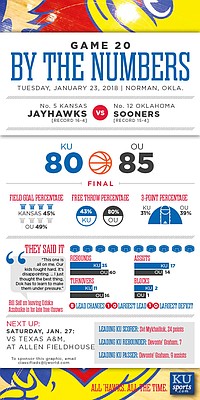 Sometimes, it takes the great ones longer than others to fully trust less talented teammates. It took Michael Jordan’s fourth NBA coach, Phil Jackson, to convince the superstar that the road to championships is one traveled by teams, not individuals. By Tom Keegan

With 7-foot center Udoka Azubuike sitting for all but four minutes of the first half because of early foul trouble, sophomore sub Mitch Lightfoot did his best to hold down the fort down low. In 14 first-half minutes, Lightfoot recorded six points, four rebounds, two blocks — one on Oklahoma phenom Trae Young — and an assist on 3-of-5 shooting to help keep the Jayhawks close at halftime. By Matt Tait

The hack-a-Udoka-Azubuike strategy implemented by Oklahoma coach Lon Kruger and his Sooners in the final minutes of Tuesday night’s game against Kansas worked like a charm in an 85-80 victory for OU at Lloyd Noble Center. The crunch-time shift away from the norm took away from the Jayhawks’ flow and productivity on the offensive end of the floor, as OU turned a three-point hole into a five-point win. By Benton Smith