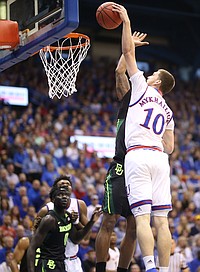 Kansas basketball coach Bill Self discussed his team's 70-67 victory over Baylor at Allen Fieldhouse, including Malik Newman's star performance in the second half and KU's solid first-shot defense against the Bears. He also talks about freshman forward Billy Preston ...

With apologies to the 1983 Chicago White Sox, there is no such thing as winning ugly. Winning sends everyone home happy, from players to coaches to spectators to ushers to bar owners. By Tom Keegan

“Coach's motto, every time the game gets close, is players make plays, coaches don't win games,” Malik Newman said. On Saturday evening at Allen Fieldhouse, the 10th-ranked Jayhawks saw a heck of a player make all kinds of plays down the stretch to pull out yet another too-close-for-comfort Big 12 victory, 70-67, that Kansas nearly lost control of down the stretch. By Matt Tait

Notebook: Jayhawks say it was 'tough' to lose freshman Billy Preston, wish him luck in Bosnia

On the eve of his big performance during Saturday's 70-67 victory over Baylor, Kansas sophomore Malik Newman spent nearly all of his time hanging out with teammate Billy Preston. By Matt Tait

Disaster averted. When the Kansas basketball team’s offense went stale in the second half Saturday versus Baylor, it appeared the Jayhawks might lose at Allen Fieldhouse for the third time this season. Instead, KU survived in dramatic fashion, winning 70-67 against the Bears by finishing the game on a 9-0 run. By Benton Smith