Kansas basketball coach Bill Self talked about the Jayhawks' slow start in an eventual 85-73 loss to Texas Tech at Allen Fieldhouse, why it's "ridiculous" when players say they need to "want it more," and KU's problems with turnovers. 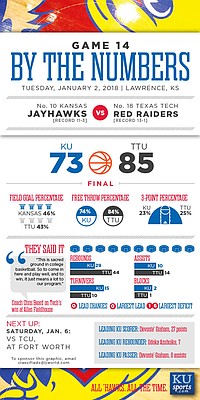 No. 18 Red Raiders knock off No. 10 Jayhawks in Allen Fieldhouse

No one on the Kansas basketball team thought winning in the Big 12 would be easy this season, and Texas Tech made sure to remind the Jayhawks of that Tuesday night, in KU’s conference home opener. The No. 18-ranked Red Raiders did more than give the No. 10 Jayhawks a battle, the men in black from Lubbock, Texas, out-worked KU at Allen Fieldhouse to earn a 85-73 victory and never even trailed. By Benton Smith

Texas Tech coach Chris Beard after 85-73 win: 'In no way did I expect to beat Kansas'

In 43 seconds midway through the second half Tuesday night, a 13-point Kansas deficit withered to six points. Pandemonium in the stands. Panic for the visitors was certain to follow. Surely, Kansas was in the midst of one of its wild second-half comebacks. Guess again. By Tom Keegan

View a gallery of images from Tuesday's game between the Jayhawks and Red Raiders at ...

Two streaks ended Tuesday night at Allen Fieldhouse and another might be in jeopardy after the Red Raiders snapped a 16-game losing streak to Kansas and won for the first time ever in Lawrence. By Matt Tait