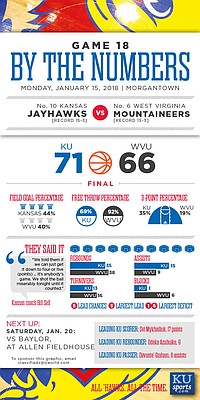 Two different Kansas basketball teams took the floor at WVU Coliseum for a Big Monday thriller won by Kansas, 71-66, on a furious late comeback from a 16-point deficit. The Jayhawks who played when sophomore center Udoka Azubuike sat nursing foul trouble looked small, slight of build, no match for a shot-blocker freed to block the rim no matter who attacked it. By Tom Keegan 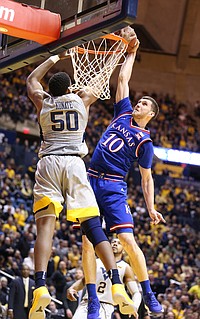 View a gallery of images from the Jayhawks' Big Monday matchup against the Mountaineers in ...

Pressing on: Jayhawks rally for rare victory at West Virginia

Recent Big 12 tradition be damned, the Kansas basketball team visited West Virginia and left without “Country Roads” resounding throughout WVU Coliseum and Mountaineers fans singing along blissfully. West Virginia failed to defend its home court against the Jayhawks for the first time in five years, as KU rallied for a 71-66 road victory, in a Big Monday battle of top-10 teams. By Benton Smith