'Turned up' Udoka Azubuike shows he can defend on perimeter, too

Here’s what Bill Self and Bruce Weber have in common: They both served as head coach at Illinois and now lead Big 12 programs in the state of Kansas. Here’s how they are most different: Weber’s teams don't pull out close games often enough and Self’s almost always do. By Tom Keegan

Silvio De Sousa's first official game as a Jayhawk probably will not be remembered for his time on the floor. By Matt Tait

It took a full 40 minutes for Kansas to emerge from the Sunflower Showdown victorious Saturday afternoon at Allen Fieldhouse. Visiting Kansas State looked right at home much of the matinee, despite playing in hostile territory. By Benton Smith

Nineteen days after first setting foot on KU's campus as an official member of the Kansas men's basketball team, freshman forward Silvio De Sousa finally has been cleared to play. By Matt Tait 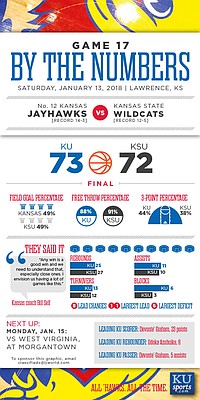 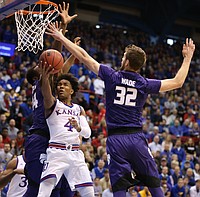 View a gallery of images from Saturday's game between the Jayhawks and Wildcats at Allen ...