Baseline View: Jayhawks grind it out for the win against Horned Frogs

Mitch Lightfoot on his 1st start, and what Jayhawks discussed after loss to OSU 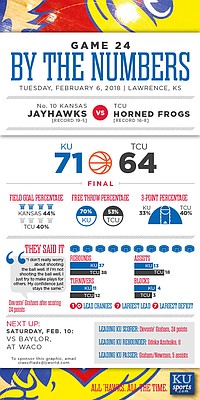 No victory is guaranteed or a foregone conclusion this season in the Big 12 — not even inside Allen FIeldhouse. The Kansas basketball team survived a serious test from visiting TCU Tuesday night, though, 71-64. By Benton Smith

Sophomore forward Mitch Lightfoot started the first game of his Kansas career on Tuesday night and helped the 10th-ranked Jayhawks win a battle over TCU, 71-64, at Allen Fieldhouse. By Matt Tait

Tom Keegan: Lagerald Vick begins crawling out of his funk

Someone had to lend Devonte' Graham and Udoka Azubuike a hand Tuesday night against TCU. Slowly, Lagerald Vick crept out of his hole, not all the way out — not yet — but just enough to at least make TCU pay a little for sending extra attention the way of Azubuike and for not leaving Svi Mykhailiuk. By Tom Keegan

After a 71-64 home win over TCU, Kansas basketball coach Bill Self said the Jayhawks competed harder than they did last weekend, that he should have played Marcus Garrett more because he played "great" and that Lagerald Vick had a ...