Kansas basketball coach Bill Self was happy with how the Jayhawks defended Trae Young during KU's 104-74 victory Monday, his thoughts on Silvio De Sousa's big game and how valuable Udoka Azubuike is to the team's defense. 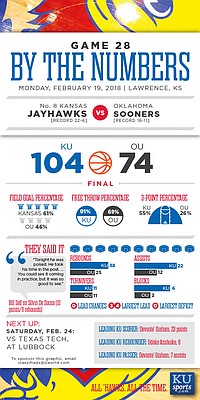 After watching a brief video that flashed highlights from his stellar career at halftime of Monday night's 104-74 victory by No. 8 Kansas over Oklahoma, Sherron Collins, Monday's guest of honor, slowly walked onto James Naismith court to watch his No. 4 jersey officially go into the rafters at Allen Fieldhouse. By Matt Tait

Eighty minutes before game time Monday night in Allen Fieldhouse, Kansas senior point guard Devonte’ Graham sat in a chair on the Oklahoma bench, eyed his target and launched a shot toward the basket. Swish. By Tom Keegan

View a gallery of images from Monday night's game between the Jayhawks and Sooners at ...

Kansas freshman Silvio De Sousa stole a little incentive before Monday's 104-74 victory over Oklahoma straight off of the wrist of teammate Mitch Lightfoot. After a spirited pregame that featured positive vibes flowing and good old Mr. Confidence peeking his head ever so slightly out, like Punxsutawney Phil on Groundhog Day, De Sousa caught a glimpse of Lightfoot's wrist and saw the words “Rebound” and “Defense” written in dark marker on the skin. By Matt Tait