Behind Lagerald Vick's heroics, No. 2 Kansas takes down Stanford in OT

Quick recap: Vick lifts No. 2 KU past Stanford in overtime

The Year of Lagerald Vick continued Saturday afternoon. The senior guard poured in a team-high 27 points to lead No. 2 Kansas to a 90-84 overtime win over Stanford Saturday afternoon at Allen Fieldhouse. Vick drilled a game-tying triple in the closing seconds to force overtime. 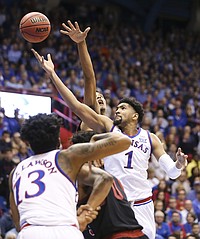 Dedric Lawson on importance of getting to FT line

KU coach Bill Self after KU’s win over Stanford