It was far from a perfect half, but it had one aspect that Kansas coach Bill Self absolutely loves — offensive rebounding. By Matt Tait

Playing inside of Allen Fieldhouse for the first time this season, the Kansas men’s basketball team proved there’s no place like home. The Jayhawks led by 15 points within the first five minutes and never looked back in an eventual 100-54 victory over Pittsburg State in the team’s second exhibition game of the preseason. By Bobby Nightengale 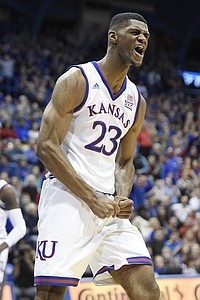 View a gallery of images from the Jayhawks' exhibition game against the PIttsburg State Gorillas ...

Eventually, the real season will begin for the Kansas basketball team, ranked No. 3 in the preseason USA Today Coaches Poll. For now, Devonte’ Graham and his teammates will spend Halloween night playing yet another exhibition. The Jayhawks played four warm-ups in Italy in August and another just more than a week ago versus old rival Missouri, winning each step along the way. Now KU makes its unofficial Allen Fieldhouse debut for the 2017-18 season, as Bill Self’s team plays host to Pittsburg State.